Æon Flux is the titular main protagonist of the TV series and film of the same name. She is a tall, leather-clad secret agent from the nation of Monica, skilled in assassination and acrobatics. Her mission is to infiltrate the strongholds of the neighboring country of Bregna, which is led by her sometimes-nemesis and sometimes-lover Trevor Goodchild.

A skilled warrior, named Æon Flux, is a member of the Monicans, an underground rebel organization who communicate through telepathy-enabling technology and are led by the Handler. After a mission to destroy a surveillance station, Æon comes home to find her sister Una has been mistaken for a Monican and killed. When Æon is sent on a mission to kill the government's leader, Trevor Goodchild, she discovers that both she and the Monicans are being manipulated by council members in a secret coup.

Æon questions the origins of everyone in Bregna, and in particular, her personal connection to Trevor. Everyone in Bregna is revealed to be a clone, grown from recycled DNA. With the dead constantly being reborn as new individuals and bearing partial memories of their previous lives, their troubling dreams have increased. Cloning was required because the antidote to the virus made humans infertile. Trevor's ongoing experiments were attempts to reverse the infertility. His ancestors had also worked on this problem. Æon learns that she is a clone of the original Trevor's wife Katherine, and is the first "Katherine" clone in over 400 years.

One of Trevor's experiments, Una, was successful: she had become pregnant. However, in order to stay in power, Trevor's brother, Oren Goodchild, had her killed along with the other members of the experimental group. He ordered all of Trevor's research to be destroyed. In a confrontation with Trevor and Æon, Oren reveals that nature has corrected the infertility problem and that some women are becoming pregnant. Oren has had them all killed to maintain the Goodchild reign. Æon then goes against both her former allies, who want to kill Trevor, and Oren.

She convinces the other Monicans to ignore the Handler and to help her kill Oren and his men. Æon goes to destroy the Relical, the dirigible that stores the DNA for cloning. There she meets Keeper, the old man who monitors everything. She discovers that he preserved Katherine's DNA for years, although Oren had ordered it to be destroyed so "Katherine" could not influence Trevor in any way. The dirigible crashes into the city wall, breaking it down to reveal the surrounding land for the first time in centuries. It is lush and fertile, not a wasteland as they were taught. 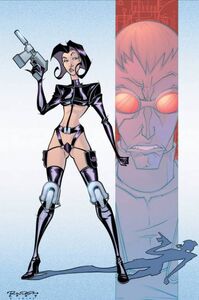 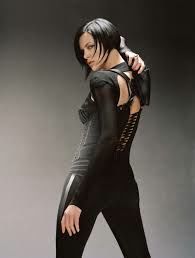 Æon Flux in the live action movie portrayed by Charlize Theron.
Add a photo to this gallery
Retrieved from "https://hero.fandom.com/wiki/%C3%86on_Flux?oldid=1738466"
Community content is available under CC-BY-SA unless otherwise noted.