I relied on others to protect me once and I lost everything. Never again.Élodie Rakoto in the description of her "Power Struggle" perk

Élodie Rakoto is one of the playable survivors in Dead by Daylight being introduced in A Binding of Kin. A skilled researcher of the Occult, Élodie uses her skills to keep herself and her fellow survivors alive.

Élodie was born into a lush comfortable household miles from Madagascar. She loved investigating things often going through her town and finding out the origin and backstory of every statue, neighborhood, and street sign. When she was 14 her parents brought her to Dyer Island for a business trip but to her disappointment it was actually a private site for exclusive members of the Imperiatti. Soon she met the Pariahs, the other teenagers on the island who didn't want to be pawns of their parents. One evening the stumbled across an abandoned internment camp, Felix Richter, one of the Pariahs was hesitant to go in but Élodie insisted. Inside they found a strange underground lab in ruins and noticed strange scratches on the wall in the form of a circle with a line in the center, running her hand across it she heard a warm whisper in her mind. She found herself on a beach and was compelled to draw the circle with the line in the center. The storm around her began worsening and the ground shook as sleek, obsidian claws tore through the concrete floor and the very earth as she saw her mother wielding a strange instrument and her father yelled for her to run. She never saw her parents again after that night. For years she had nightmares of the night her parents were taken, she searched for years for information on the disappearance of her parents, finding old text that detailed an otherworldly evil called by many names, The Abyss, The Infinite, The Hole. The Pariahs slowly drifted apart with their lives and searches for the truth. To aid in her research she got a job working for Hazrah Shah, an occult specialist who archived rare artifacts. He recruited her after she recovered a lost artifact, for years she acquired occult artifacts in exchange for money, information, and equipment. She soon discovered the annals of a witch trial convicting a mother birthing conjoined twins in the 17th century. According to legend, an occult incantation was engraved on a set of skulls, all of which the Collector possessed except one—the witch's skull. There were no traces of where the skull was now, but Élodie had found a newspaper article dating back to the same year, mentioning that most remains had been relocated to the catacombs to avoid a pandemic. She snuck into the catacombs to retrieve the skull, but was knocked unconscious and captured by cultists of the Black Vale, a cult that was part of a ring of cults that worshipped a being they called "The Old One". Smashing the cultist carrying her on the head with a nearby skull, she began to run away but was stabbed in the side. Using her blood she drew the circle with a line in the center. She looked up to find herself in a strange place at first it looked like her home but soon it changed to something darker, she had found what she was searching for, the Abyss, the Infinite, the Hole, The Entity. Now in the Entity's realm, Élodie uses her skills to help her and her fellow survivors, including Felix, escape from the Entity's murderous servants, which include the very same conjoined twins the annals spoke of. 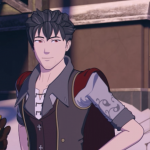