Free her land of Saruman and his Orcs.

Éowyn is a character in The Lord of the Rings. She is a shield-maiden of Rohan who helped Gondor fight against Sauron's army. King Théoden told her to stay behind when the Men left to fight, but she decided to come anyway. In the battle, Éowyn kills the Witch-King of Angmar with the help of Merry Brandybuck.

She was born in Edoras, and lost her parents, Théodwyn and Éomund, at an early age, but she was also forced to look after her ailing uncle, King Théoden. She was trained as a complete warrior with all the skills, like sword fighting or other crafting skills.

In the acclaimed film trilogy directed by Peter Jackson, she is portrayed by Miranda Otto. In Rankin/Bass Return of the King, she was voiced by Nellie Bellflower.

Lord of the Rings book series

Éowyn is briefly seen in The Two Towers with her uncle and is mentioned to be his sister-daughter.

When her uncle left for the Hornburg, Éowyn was left in charge of Rohan. She was also having growing feelings for Aragorn. However, he dismissed her feelings.

The Return of the King

Éowyn plays a more important role in The Return of the King.

When trouble began stirring in Gondor, Éowyn begged her uncle to go with them for their next battle, but Théoden refused. Being furious for being left behind again, Éowyn disguised herself as a man to go to war using the alias, Dernhelm.

She later carried Merry with her, who was also ordered to remain behind. During the Battle of Pelennor fields, Éowyn fought alongside her uncle, but he was injured by the Witch-king of Angmar.

However, as she confronted the Witch-king, he told her that no living man could kill him. However, Éowyn took off her helmet and revealed that she was no man, but a woman. Merry stabbed the Witch-king in the leg while Éowyn was able to kill the Witch-king.

Being severely injured, Éowyn was immediately healed by Aragorn, who saved her just in time before she certainly would have died of her wounds. She remained behind to heal, while also meeting and falling in love with Faramir.

At Éowyn's behest, Merry was made a knight by her brother, the newly-named king of Rohan.

Post-War of the Ring

After the War of the Ring, Éowyn married Faramir just outside of Ithilien and became its lady while Faramir became it's king. Together, they had one child together named Elboron and had a grandson named Barahir.

Lord of the Rings film trilogy

Éowyn appears first in the film attending to her uncle, whose mind was poisoned by Saruman. She later finds her cousin dead as Wormtongue advances to her, but Éowyn turns him away in disgust. She later goes outside, where she spots Aragorn, Legolas, Gimli, and Gandalf approaching.

The Return of the King

Her role in The Return of the King movie is nearly the same as in the book, with a few minor alterations. For example, Éowyn does not hide her identity to Merry, as he easily recognizes her when she rides with him to Minas Tirith.

In temperament, she was idealistic, spirited, brave, and high-minded, but very lonely, having sacrificed her own happiness for years to care for her sick uncle and meet the responsibilities of a shield-maiden. She was willing to fight on the battlefield in defense of her people. She cared for her family very much and didn't like it when harm befell her uncle, brother, or friends.

Éowyn is a young woman with blonde hair and blue eyes. She mostly would wear silk dresses and sometimes wore armor while she was training. Notably, she disguised herself as a man she wore armor and chainmail. Éowyn was also a beautiful woman. Because of her beauty, two men were attracted to her: Gríma Wormtongue and Faramir. However, Faramir was truly in love with Éowyn while Wormtongue was lustrous for her.

Éowyn was at first in love with Aragorn.

They first met in Rohan when he came with the wizard Gandalf, the Elf Legolas, and the Dwarf, Gimli, and seemed to have grown a friendship. She once made a terrible soup, but Aragorn still took it trying not to hurt her feelings and pouring it out. On the eve of battle, Aragorn later rejected her love affection toward him, as he was already in love with someone else. When Aragorn rejected her softly, Éowyn ran away heartbroken and soon knew that there would never be any love for Aragorn. While Aragorn did not love her, he did grow to care for Éowyn, seeing he healed her in the House of Healings. After she met and fell in love with Faramir, the two of them remained friends only.

After Éowyn was poisoned by the Witch-king while killing him with Merry, she was sent to the House of Healings, where Aragorn healed her, Faramir and Merry. Éowyn first saw Faramir when she stood by her window and he was looking at her from afar. When the Battle of the Black Gate took place, Éowyn and Faramir began to realize they were in love with each other and bonded. They officially become a couple while Éowyn remains friends with Aragorn. They had a quiet moment together as the Forces of both Gondor and Rohan advanced to the Enemy, during which they bonded and grew fond of each other. They are officially a couple, in the end, seeing as she and Faramir attended Aragorn's coronation together. The two will eventually married and had a son named Elboron. 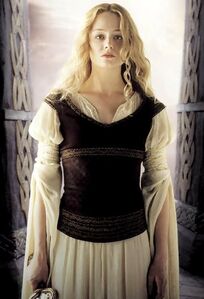 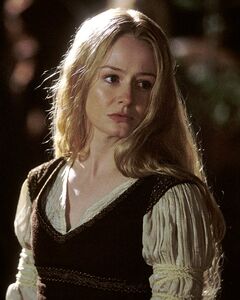 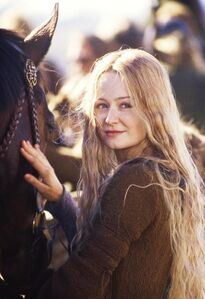 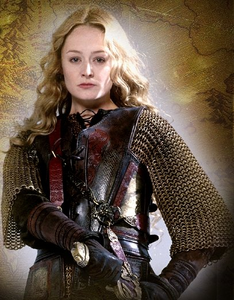 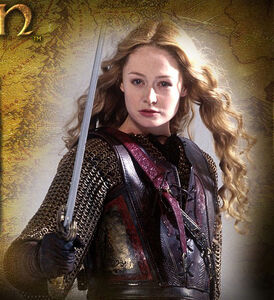 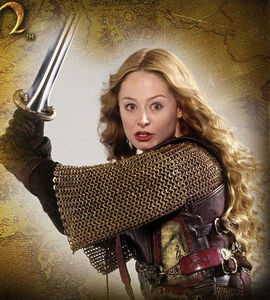