Dimwitted Singer
Stuart Pot (also known as 2-D) is the lead vocalist and Pianist of Gorillaz. He is also the DJ of several of there songs. He is a kind-hearted person, although, he is also rather dumb.

Stuart Pot was born on May 23, 1978 to David and Rachel Pot. His real name is Stuart Pot (his last name was often thought to be Tusspot, though his father changed his name to "Pot" shortly before Stuart was born to avoid him from getting bullied at school), but is often shortened to Stu-Pot. He was born in Hertfordshire, England and was raised in Crawley, England and was educated at St. Wilfred's School (the same school that educated the members of The Cure). His father, David Tusspot, worked as a mechanic and owner of the Tusspot's Fairground. His mother, Rachel Tusspot, was a nurse who supplied Stuart with headache pills from his tree accident. Stuart wasn't a very intelligent boy, he was known as a kind person and had a general love of music. His parents recall a little ten-year-old bouncing around in his room listening to The Clash, Agustus Pablo, The Human League (this band was his favorite) and many other musicians of the sort. He hit his head when falling from a tree at the age of eleven, causing all of his hair to fall out. When it came back it was a deep 'azure blue'.

When he was 19, the drama in his life began when hooligan Murdoc Niccals, age 31, purposefully crashed his Vauxhall Astra through the wall of Uncle Norm's Organ Emporium, where Stuart had been working, in an attempt to ramraid it and steal the synths. Murdoc's bumper crashed into Stuart's face, landing him with an 8-ball fracture also known as 'hyphema', although he can still see. Murdoc was arrested and sentenced to carry out 30,000 hours (1,250 days) of community service as well as care for the vegetablized Stuart for 10 hours every week.

One year later, in a poor attempt to impress some women, Murdoc performed a 360 in a Tesco car park in Nottingham with his vehicle. This sent Stuart crashing through the windscreen, hitting his head on the curb, fracturing his other eye. When Stuart awoke after what seemed to be him sliding on the cement for about a mile, he turned to look at Murdoc. This is when Murdoc knew he had his front man. "A fractured-eyed blue-haired god", Murdoc recalls. Murdoc nicknamed Stuart '2-D', which stands for the "Two Dents" in his head. Rather amusingly, Stuart adores his new nickname, dropping the use of his birth name completely and even signing formal letters with the first name "Two" and surname "D". 2-D would appear to have a chronic history of violent blows to the head, coupled with a complete lack of natural intelligence. Damon Albarn and Jamie Hewlett commented on this, saying that he has a blank sheet of paper where a brain should be. Despite this, he serves as Gorillaz's lead vocalist.

Originally, the guitarist of Gorillaz was going to be 2D's girlfriend, Paula Cracker. Paula and 2D where very close (or he thought they where close), so when 2D's best friend, Russel Hobbes, caught Paula and, band bassist, Murdoc Niccals, having sex in the toilets of Kong Studios, he was deeply saddened. This, along with his frequent headaches and eye pains, led to him getting addicted to pain killers and whisky.

Recording Gorillaz's first album, was rather hard for 2D. Manly, because he was often too wasted to sing and play piano properly. But also due to Murdoc frequently bullieing and abusing him. But it wasn't all sadness and despair, he became good friends with Russel Hobbs and also became a sort of brother figure to, guitarist, Noodle.

After recording the album, the band went on tour. 2D frequently became wasted and drunk. Once he was so wasted, he LEGALLY married a women. Despite this he soon became a super star in the music industry, and was frequently featured on MTV.

While the band was on hiatus, 2D started working at his father's fair ground, where he was brutally tortured by the children driving the bumper cars.

Not much happened in Phase 2, involving 2D, besides him going to rehab to help with his addiction. (it did not do much)

When the band went on hiatus, AGAIN, 2D worked as a doc-boy, helping the sailors unload their luggage after an expedition. He was happy like this, until Murdoc had him gassed and sent to Plastic Beach to work on their new album. 2D was locked inside the bottom cellar, where there was a large window. Right outside of the window, however, was a large whale 2D was terrified of.

Soon the black cloud invaded Plastic Beach, casing a war to break out. 2D, hid in his room for most of the battle, only coming out to resupply the band with ammo. Unfortunately, the whale 2D was mortified of, broke threw his window, gobbling him whole.

Soon, the whale died, and 2D was left stranded on a island. He survived only off of the whales flesh, as he slowly went crazy, due to lack of MUCH NEEDED medication. Soon he saw a plane fly by, he followed the plane to a nearby rave. he soon relised he was actually on a island the hole time.

He spent most of the following days being the "island king" and making friendship bracelets. He was soon kicked out of his house after his business started flopping, so he decided to go back to England.

When he got off his plane, he saw Murdoc holding a large sign that said "wanker". Meaning, that Gorillaz was coming back together. The band moved into a large haunted house. Thinking it would be a good Gorillaz HQ. After leaving the haunted house, they moved into a cramped apartment that was owned by The Boogieman.

After Murdoc got arrested, the band broke up once more. We do not yet know what happened during the hiatus.

The band soon got together for The Now Now. Due to Murdoc being in prison, there was nobody to bully 2D. This caused him to get a MUCH needed boost of self-confidence and happiness in his work. This also caused him to get extremely rude and arrogantly. Constantly stating that he was was better than Noodle and Russel. Russel and Noodle initially accepted this as a part of his transformation after being free from the shackles of Murdoc's abuse. However, as time progressed, his ego became more prominent and Noodle became concerned and speculated that El Mierda was perhaps related to this, theorizing something was changing inside 2-D.  However, it turned out in the end that El Mierda wasn't related and 2-D had just grown a huge ego without Murdoc in the group.

2D is a main character in the web series Song Machine. 2D is usually sweet and kind, but more than a little blind-sited.

2D is briefly seen in a large croud of people, he is hard to spot, however, due to his pink suit and heart-shaped glasses. He is also seen on a newspaper ad.

2D is seen on a episode of MTV Cribs, where he is beaten by Murdoc

2D is the main character of the Gorilla bite shorts

Phase I: Celerity Take Down

2D is a secondary character of Phase I: Celebrity Take Down 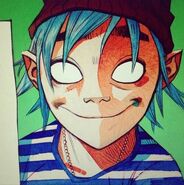 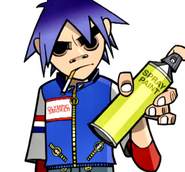 2D in Feel Good Inc, the band's most popular hit from 2005.
Add a photo to this gallery
Retrieved from "https://hero.fandom.com/wiki/2-D?oldid=2055391"
Community content is available under CC-BY-SA unless otherwise noted.