YoRHa No.2 Type B

Working with 9S.
assisting other people by performing tasks requested.

YoRHa No.2 Type-B, generally known simply as 2B, is one of the main protagonists and player characters of the video game NieR: Automata. She is a female android created by an organization known as YoRHa who was sent to earth to fight against the robotic lifeforms known as the Machines who have invaded Earth and drove humanity off of the planet. She is assigned with her partner known as 9S, who assists her in various missions given by the YoRHa Commander or anyone they seek to help.

2B's appearance as an android appears to be that of a young woman with a pale complexion and she has a slim figure. She appears to have a mole on the right part of her chin. She has short, silvery white hair and is revealed to have grayish-blue eyes but is covered with her blindfold. She wears a black dress with a skirt. It appears that she is wearing a white thong leotard underneath her dress and there are two white finger gloves with black on the section of the fingers. She also wears long black high heels with See-through stockings.

2B is a blade of quiet determination. As a combat android, she is not fond of having idle chatter on irrelevant subjects and is generally reticent towards others. She also has high respect and obedience for the chain of command and rarely questions her orders, unlike her partner 9S. She also doesn't mind running errands for the Resistance, saying that they help with their mission and believing it to be better than constantly being in combat, as that has an increased chance in dying. She is also very logical and professional, frequently saying that feelings are prohibited. However, 2B occasionally expresses a notably sardonic wit in the face of certain situations and at times, she can be hot-headed. She is often sarcastic, particularly towards Pod 042 due to his tendency to point out the obvious.

However, 2B is a very kind person deep down. She cares a great deal for her friends, petting her Pod as though it were a pet and going so far as to find a picture of a flower for Operator 6O. She is also very respectful towards others' wishes; when she and 9S are searching for the memories of an android with amnesia via going to places 9S wonders what's so important about them. 2B merely states that the memories are important to her and that's all that matters. In addition, despite her professional nature, 2B dislikes 9S calling her "ma'm" describing it as "unnecessary." Her cold and aloof exterior is largely out of necessity, as her defense mechanism for the horrors of life and the reality of her programming.

Despite stating that emotions are prohibited in YoRHa. Ironically, 2B herself has let her emotionless guise slip in certain situations, especially as she grows closer with 9S. She comes more interactive and engages more in conversation. She also shows a uncharacteristically clingy and envious side during route B, when she questions 9S' willingness to do a task for a girl without any personal gain, suspecting that it's because she's pretty.

In numerous moments throughout her adventure, 2B expresses frustration and pain with her true role in relation to 9S, hating the cycle they are locked in. She becomes emotional at having a chance to finally save the 9S she knows from Engels' attack at the beginning of the game but later shows anger at learning that his memory after their initial rendezvous was lost.

Little is known when 2B was created but it is assumed that she was created before the events of the story as part of the new line of YoRHa androids. She was given the designation of 2B as a cover by her superior. Who instructed her to observe one of the new Scanner models in action during YoRHa's operations against the machines.

2B's role was to ensure that 9S would not discover the true nature of Project YoRHa by executing him in case he dug too deep because of the natural curiosity programmed into him. Over the course of hundreds of operations, 2B was forced to kill 9S and wipe his memory countless times, an act that she came to hate for the pain it caused her after bonding with him over that time. 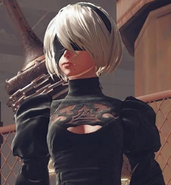