7 is the deuteragonist of the 2009 animated feature film 9. She is a warrior for the Stitchpunks, and is the rebellious and protective portion of the Scientist's personality. She is the sole female stichpunk.

She was voiced by Jennifer Connelly.

7 appears to be made from a small weave of corduroy. The her fabric skin has become bleached from long amounts of exposure to the sun due to long intervals of exploration. She wears a bird skull from a crow as a helmet, and the bones of the animal hang down from the sides of her helmet to act as a sort of earrings. Two long natural color-striped feathers are strap-tied to the back of her helmet which visually shield her backside, while also covering a previous injury where a patch of striped fabric now obscures most of the number inked on her back. She wears a small russet metal bracer on the forelimb of her right arm along with a small shield made from part of an old bullet shell and a galvanized flat washer tethered altogether with a durable string. Her spear is made from a black clock hand and a small knife blade. Near the end of the film, she loses both her helmet and her shield.

Aside from the aforementioned "earrings", she does not have hair nor accessories to distinguish her as being “feminine" appearance-wise. However, her structure is taller and slimmer compared to her other counterparts, giving her a svelte appearance. “Feminine" stitchpunks such as 7 have a shoulder delineation that is noticeably curved sooner to the distance between the tip of the shoulders to the actual neck joint of the endoskeleton. The shoulders are less straighter in the outlined shape and rather come down with the natural curvature slightly more vertiginous than the other eight stitchpunks from the Scientist. The chin-line shape is an other physique that can be varied, as how 2, 5, 6, and 9 particularly have a similar rounded chin-line shape. 1 and 8’s facial formality were modeled differently from the others, but 7 and the twins (3 & 4) have a more pointed silhouette of their chins (though 3 and 4 do not have a specified gender).

7 is the only female creation. A rebel and a loner, she is willing to take many risks for the good of her people. She is kind and caring for others, and is very protective towards 3 and 4. Near the end of the film, 7 shows her vulnerability, most notably when she believes 9 is crushed to death. Her canvas skin’s color has been bleached away by the sun, leaving her skin moonstone-white; and she uses a blade mounted on a long staff for fighting. She wears a helmet made from a dead bird's skull as well as two bird feathers hanging down her back, covering up her briefly shown scar that covers her number. She was the first to reject 1's fearful teachings, and has spent the time leading up to the film in the wilderness fighting the Cat Beast on her own. Her skin is fastened together by stitching and a green button on her chest.

Along with 9 and the twins, she is a survivor. As a hardened warrior, she hasn't let anyone into her heart for a long time, but she is gradually softened towards 9, eventually becoming a close friend.

7 is a spit-fire, being strong-willed, rebellious, independent, and defiant. However, in battle she is calm and collected. She finds herself frustrated with the others for not being willing to go out and fend for themselves like she has, and she is especially abhorred by 1 due to his ego regarding leadership mannerisms. She is also specially protective of 3 & 4, having a maternal role over them. At the beginning of the film, she had more of a hardened nature— but after 9's arrival, she begins to develop a more sensitive and emotional side. 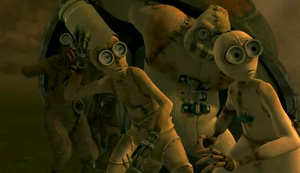 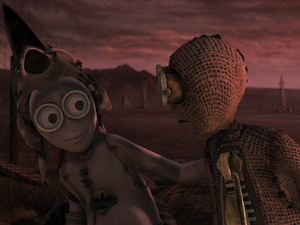