Gordon Shumway, nicknamed ALF (acronym for Alien Life Form), is the main protagonist of the titular series of the same name. He is an alien from the planet Melmac.

ALF was born on October 28, 1756 and has a younger brother and sister. He once mentions that he was conceived in a DeSoto. ALF's body is covered with rust-colored fur (he once described his color as burnt sienna), but has implied that it is not his natural color. He has a rippled snout, facial moles, eight stomachs and he likes to eat cats. He is about three feet tall.

He attended Melmac High School for 112 years, where he majored in software and pedestrian crossing, and was captain of a Bouillabaisseball team. In college, ALF majored in physical education.

ALF was later employed as an Orbit Guard and was called to duty shortly before his planet was destroyed in a nuclear war. His girlfriend Rhonda escaped the destruction of Melmac in a spaceship piloted by his best friend Skip. However, At the end of Galactic War III, ALF was arrested by the angry Prince of the Melmacian Trade Federation, he escaped & fled, he ended up hitting Torkwrish & encountered Torks & Blood Torks, While attempting to refuel his spaceship, in his search for fuel, he got attacked by a Blood Tork & nearly suffered the fate of a Kiss of Blood.

In addition to his native Melmacian tongue, ALF can speak both English and Spanish proficiently, although his English spelling and penmanship is very poor. Although there is no explanation given as to how he learned these languages, it is evident that elements of Earth culture have infused themselves into Melmacian culture (perhaps through observation or monitoring of television and radio broadcasts), in that ALF was once in a dinner theatre production of Man of La Mancha on Melmac.

ALF is an avid musician who sings and plays saxophone, guitar, bass guitar, drums, and piano.

ALF is troublesome, sarcastic and cynical, and sometimes he puts himself at the risk of being discovered while doing some of his often unintentional pranks. ALF is known to have set 246 fires with the Tanner family, but most were barbeque related. Before he met Rhonda, his girlfriend, he was engaged to Ruby.

Life with the Tanner Family

One day, ALF followed an amateur radio signal to Earth and crash-landed his ship into the garage of the Tanner family. The Tanners are a suburban middle class family consisting of the social worker Willie, his wife Kate, their children Lynn and Brian, and their cat Lucky. Since the crash-landing, the Tanners have helped take care of ALF and hide him from the Alien Task Force, a secret U.S. military organization that tracks down alien creatures.

ALF increased the Tanners' expenses. The budget for extra food and repairs for damages in the house were what forced the Tanners to increase their spending budget. In Varsity Drag, Lynn was upset because she couldn't go to college, due to the Tanners not being able to afford it.. In Keepin' the Faith, he bought $4,000 of cosmetics with Willie's credit card, and in The Gambler, he put the Tanners into a gambling debt of $6,000 to Nick "The Fish" Mints. In Project ALF, it is said that ALF has made over 300 fires, though most were barbeque-related. 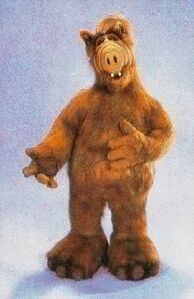 The lovable alien friend we all know. 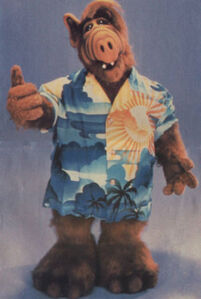 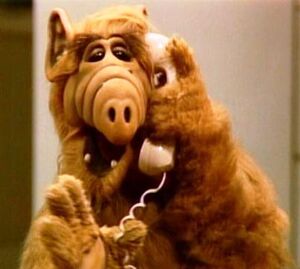 ALF talking to someone on the phone. 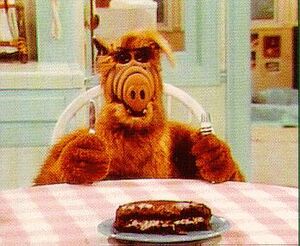 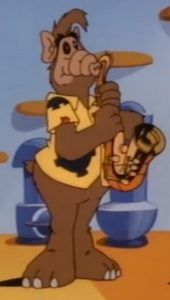 Alf in the cartoon 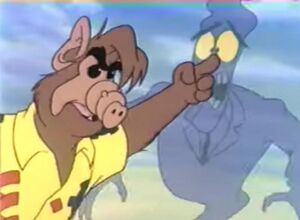 ALF stands up to Smoke in Cartoon All-Stars to the Rescue.
Add a photo to this gallery

Retrieved from "https://hero.fandom.com/wiki/ALF_(Gordon_Shumway)?oldid=1640897"
Community content is available under CC-BY-SA unless otherwise noted.