Aaron Davis is a minor anti-hero in the 2017 superhero movie Spider-Man: Homecoming. He is a criminal and an uncle of Miles Morales who was originally willing to buy Chitauri weaponry before coming at odds with Spider-Man.

He was portrayed by Donald Glover who would later portray the younger Lando Calrissian in Solo: A Star Wars Story, and adult Simba in The Lion King (2019).

Despite being a criminal, Davis appears to a be genuinely decent person, saying himself that he hates the Chitauri weaponry and prefers using simply weaponry. He also appears to care for his nephew and has a moral conscious, he also seems to show respect and kindness towards Spider-Man to the point of even giving him friendly advice.

Aaron is trying to buy weaponry from Adrian Toomes, but is wary of the heavy weaponry that Toomes and his gang are selling and asks for something less lethal. Jackson Brice shows him more weaponry also made from Chitauri technology. When a ringtone rings, the two criminals suspect Aaron set them up and pull their guns on him, only for Spider-Man to reveal himself and Aaron flees the scene. Later on in the movie, Davis is walking back to his car with his shopping and while closing the trunk, Spider-Man webs his hand to the top of it. Spider-Man tries to use his suit's interrogation mode to intimidate Aaron, however, he is completely un-phased by, as Spider-Man had little idea of what he was doing. After Spider-Man turns the interrogation mode off, Aaron willingly helps him out by telling him about a deal on the Staten Island ferry, stating that he doesn't want Toomes' high-tech weapons around, as he has a nephew living in the area, also telling Spider-Man to work on his interrogation methods. Spider-Man thanks him for his help and tells him the webbing will fade off in about two hours, to Aaron's dismay, as he had ice cream in his shopping bag. 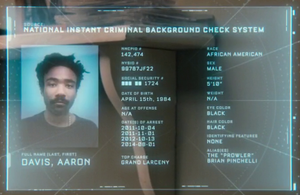 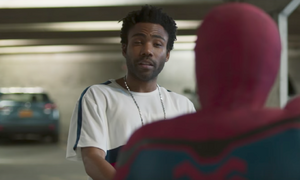