To go to the ground (succeeded)

To serve A.L.I.E. (formerly)
To help leading the bunker

Abigail "Abby" Griffin was a main character in seasons one to six of the CW show, The 100.

She was portrayed by Paige Turco.

Abby is the chief doctor on the Ark and on the ground for Skaikru. She was also Clarke's mother and Jake's wife. She is naturally gentle but doesn't hesitate to take drastic decisions to save her people and loved ones, especially Clarke or Kane. She is indirectly responsible for the death of her husband by denouncing him to the Council of the Ark when he wanted to warn the population of the lack of oxygen and therefore of an unsustainable life for them.

In season one, she watches, with her assistant Eric Jackson, over the hundred delinquents who have been sent to Earth by the Ark. As they remove their bracelets, Abby is worried and decides to go to Earth with Raven, a mechanic. However, she gets arrested by Marcus Kane and Raven goes on the ground alone. Later, Abby still goes to Earth with residents of the Ark, and Camp Jaha is built in honor of the eponymous chancellor.

In season two, she heals Raven who was shot by Murphy in the back. She leaves with Raven to Mount Weather to destroy the radio tower which scrambles the signals to find survivors of the Ark. Later, she, Kane, Raven and members of the Sky People are kidnapped by the Mountain Men and witness the terrible harvest by Cage. Fortunately, Clarke irradiate the whole place and Abby is released with her people.

In season three, Abby is very worried because Clarke left Arkadia and everyone is looking for her and naming her as Wanheda. On her way to Polis, she finds her daughter there and she says Sky People must be part of the coalition, although Abby refuses at first. Later, she sees Raven, happily, and understands that Jaha is handing out chips to bring them to the City of Light. He then psychologically tortures Abby to take one, which she accepts. All A.L.I.E. followers then go to Polis and their leader, Ontari gets also chipped. Abby then tortures Clarke and hangs herself to force her to take the chip but is released from the control of the AI. With Murphy's help, she then transfuses Ontari's blood into Clarke's body to get her to the City of Light and deactivate A.L.I.E. The maneuver is successful and Abby finds Kane, who bursts into tears, realizing the harm he has caused despite himself.

In season four, Abby goes to Becca's island and finds her former laboratory. To be able to resist the Praimfaya, she does an experiment on a Grounder by injecting him with Nightblood blood but it is a failure. During the apocalypse, Abby lives in the Second Dawn bunker found by Jaha. Not being with Clarke again, she does drugs with pills and Kane is even convicted, assuming her crime.

This problem still lasts in season five, and Octavia, renamed Bloodreina, rules the bunker, staging deadly battles to survive. Abby disapproves and also witnesses Jaha's death at the start of the season. As prisoners from Eligius IV, led by Paxton McCreary land on Earth, they capture Abby for healing them. She then has a relationship with Vinson, one of the prisoners, who is cannibalistic and offers her his pills, drugging her even more and making her condition worse. But when the latter attacks and fatally injures Kane, Abby kills the prisoner on the spot, shocking him to death.

In season six, she comes up with the idea of ​​integrating Kane's spirit into a chip and having it back into another man's body, thus serving as his host. However, the already weak Kane refuses to be in someone else's body and gets floated in front of Abby. In Sanctum, Abby is captured by the Primes and Russell destroys her mind to transplant his wife's into her body. She then dies in front of Jackson and Raven while her body now serves as a host for Simone Lightbourne. Clarke is shocked to learn of this and even more so when she herself floats Simone on Eligius IV.

In season seven, Jackson heavily blames Murphy for Abby's death. Although Clarke hides it by saying that she is fine, she is still devastated by the death of her mother. Comforted by Madi, Clarke reminds her that Abby was already dead before getting Simone floated. 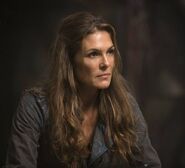 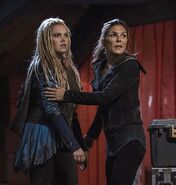