Abraham Lure, or simply Abe, is a fictional character and the protagonist of the Oddworld video game series, created by Oddworld Inhabitants. Abe was introduced in the 1997 game Abe's Oddysee and his character has changed and developed throughout the subsequent games, Abe's Exoddus and Munch's Oddysee.

Abe was first seen in Oddworld: Abe's Oddysee and it's remake Oddworld: New 'n' Tasty. He was a model employee at the Rupture Farms meat processing plant and one of the many Mudokon slaves born into industrial servitude. While working late one evening, Abe came across a billboard that advertised something "New 'n' Tasty" when he heard noises coming from the nearby boardroom. Taking a peek inside, he saw many the Glukkon shareholders in a meeting with his boss Molluck over a severe drop in profits. However Abe was horrified to learn that Molluck planned to fix the problem with their "New 'n' Tasty" product, which was revealed to made from Mudokon meat.

Abe knew he had to escape Rapture Farms and managed to do so before noticing the Moon had a Mudokon's handprint as its face. At that moment, Abe took a sudden tumble off a cliff and afterward met a masked shaman called Bigface who informed him that he was destined to be the Mudokon savior by liberating slaves from their corporate oppressors. Abe was then sent to the naive Mudokon hideaway of Monsaic Lines where he must complete trails in Paramonia and Scrabania to gain the power to destroy Rupture Farms. Although those lands were sacred, they were still crawling with corporate lackeys such as Sligs and Slogs. So Abe worked together with wary naive Mudokons to get passed them.

He eventually made it to each destination and learnt that nature was suffering due to Rapture Farm's activities, with Paramites and Scrabs (creatures sacred to Mudokons) being hunted to near extinction. Abe had to survive venturing through the nests of these creatures to be branded with scars that can summon the Mudokon demigod Shrykull to eliminate any obstacles in his way. Once he achieved obtaining this power, Abe made his way back to Rapture Farms so he could save the remaining Mudokon workers there before shutting down most of the plant's machinery. Molluck was furious over Abe's actions and called the company shareholders for another emergency meeting in the boardroom as he ordered the entire facility outside of it to be flooded with toxic gas. Abe quickly fought his way to the boardroom and used Shrykull's power to eliminate almost everyone inside before he was knocked out by a couple of Sligs.

Abe was hung over a meat grinder where he reflected on his past choices until he was personally confronted by his old boss Molluck. The Glukkon ordered his Slig henchman to activate the grinder beneath their captive, leaving Abe hoping someone would come to save him. If the player failed to rescue many workers, the native Mudokons refuse to help Abe in his moment of need and he is dropped into the meat grinder much to the pleasure of Molluck and his henchman. Although, if the player does rescue a lot of workers, the native Mudokons cause a bolt of lightning to strike both villains before Bigface arrives to free Abe and take him to be praised by all the Mudokons he had saved.

Abe and a bunch of Modokons went to another factory to free more Modokons. The others that went with Abe drank a brew that caused them to be ill, he saw a blind Modokon a bit later but accidentally caused him to fall. Abe ran from a flying Slig and went to save more of his people. Abe later found himself to destroy a part of the facility and found himself near a crypt of his people and so went through a few trials and later saw a trio of 'weirdos' that gave Abe a new tattoo and the ability to heal the ill Modokons and so left to the SoulStorm Brewery.

After finding his way to the SoulStorm Brewery, Abe had had to look for three Glukkons to pass through the factory even more. While doing this, Abe rescued more of his people, Abe had to go through the Slig Barracks in hopes to control the Glukkon known as General Dripik so he could have access to reach the Vice President Glukkon. He then went to the Boneworkz to control Director Phleg, again to reach the Vice President Glukkon. Abe then went to look the last Glukkon while freeing more Modokons and after reaching he took control of Vice President Aslik so that he could go fourther into SoulStorm Brewery. Abe later went through the factory, only to find out that Modokon bones wear not the only thing that the Glukkons wear using for their brew, as they wear also using Modokon tears as well, regardless of this, Abe went to rescue his people and met a Sharman that gave him a slight healing ability for those tortured Modokons. Abe went deeper through the factory until he overheard the Glukkons speak about the boiler, giving Abe the idea to overload it. Abe sabotaged the boiler and rescued two more Modokons, giving him the ability to turn into the demigod Shrykull so he could escape. Depending on how many Modokons that Abe has rescued will determine whether he succeeds in his escape.

Failing to save enough Modokons will cause Abe's friends to betray and abandon him at the brewery where he is then electrocuted by the Brewmaster. However if many Modokons are saved, Abe will make a quick getaway before the brewery explodes and soon reunites with various Modokons who celebrate his success. While many Modokons recovered from their brew addiction at Alf's Tea Shop, Abe noticed that many of the wary native Modokons were slowly coming together with those liberated from factories and were both ready to save the rest of their kind from slavery.

Abe and a few other Modokons went to look for the last of the Gabbits known as Munch. Abe went through a jungle and near a part of a factory until one of them shoved Abe down a guezzer where he met Latamire Munch, where the two then went to free a bunch of Modukuns and Fuzzles, while fighting against a bunch of Sligs until Abe brought Munch to the Almighty Raisin. The Almighty Raisin later told the two to help a lazy Glukkon known as Lulu, as Abe possessed him to create Lulu Fund. Abe and Munch then went to Save more Modokons and Fuzzles, with Abe also possessing some Glukkons to donate to Lulu Fund then destroying their minds. Abe and Munch would later follow Lulu to Vyykers Labs. Although if they did not save the right amount of Modukun Scrubs and Fuzzles, the Fuzzles would attack both Abe and Munch, where Abe would be beheaded and become a trophy to the Vyykers. If Abe and Munch did save the right amount of Modukun Scrubs and Fuzzles, Abe would possesse a now rich Lulu, where he and a Slig would enter Vyykers Labs. Abe and Munch would also enter the labs, where Abe sent a pair of Scrubs outside, hoping that they would would help the two. Abe would collect all of the Modukun eggs, and free more Modukun slaves with the help of Munch for a bit. After seeing the Modukuns with the eggs, Abe went to an auction that he possessed Lulu to head to, where he went to possesse Lulu again in hopes to collect the Gabbit Eggs. If Abe and Munch has a near hundred percent positive quarma, by freeing all of the Modukun slaves and Fuzzles, Munch told Abe that the Fuzzles set up a bomb in Vyykers Labs, leading to it to be blown up and showing the second Oddworld moon, having a Gabbit foot on it.

Abe was seen speaking to a shaman, who was trying to convince him to remove the stiches on his mouth. Abe however could not do so, only noticing that the Mudokons' hideout was buring around him. Abe later left the burning hideout, and went out of his way to capture Sligs with their own tape. He later saw a dying Scrub, witch gave him a crystalized insect. Abe later went to meet up with the Modukuns. 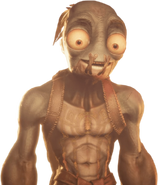