She was voiced by Stephanie Lemelin, who also voiced Zero in the same series.

Not too much is know about her other than her growing up on a farm and then running as teenager. After she had left the farm she forgot her mother's face. Her mom then died due to an unknown cause. Her dad was killed by zombies. Later on a zombie outbreak had happened. She meets up with a man named Marlton Johnson. The two head to the town to make a last stand but are eventually saved by Samuel J. Stuhlinger and Russman the four fight off zombies and do a few tasks given by Dr. Ludwig Maxis and Dr. Edward Richtofen.

The are two tasks one for Richtofen and one For Maxis there both optional and are on other sides if the players do Richtofen's task then there on his side and are against Maxis. If players do Maxis' tasks the'll be on his side and against Richtofen. The four head to China and do one of the tasks. The head to Africa and locate a old buried wild west town. 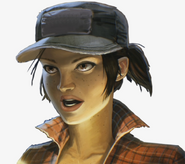 Misty in Black Ops II.
Add a photo to this gallery

Retrieved from "https://hero.fandom.com/wiki/Abigail_%22Misty%22_Briarton?oldid=1925013"
Community content is available under CC-BY-SA unless otherwise noted.