Take vengeance for the death of her parents (abandoned).

Suicidal Thrill-Seeker
Abigail "Aby" Jones is the deuteragonist and main heroine of the 2020 Netflix original anime television series Great Pretender and its manga adaptation of the same name. She is the main protagonist of the second case, Singapore Sky.

After the death of her parents at the hands of the American Air Force in Iraq, Abigail joined an extremist organization dedicated to fighting the U.S. Army. During an attack at an enemy outpost, Abigail and her comrades were massacred. In the aftermath, Aby abandoned the cause and joined the French conman Laurent Thierry as his partner-in-crime. During a job in Los Angeles, Jones met the amateur Japanese conman Makoto Edamura who joined their crew.

Due to her traumatic past, Abigail was emotionally closed off from everybody, rarely sharing her feelings or details of her past with others. Jones would often put herself into dangerous situations in the hopes that she would eventually die, making her suicidal.

Abigail is voiced by Natsumi Fujiwara in the Japanese version of the show and by Kausar Mohammed in the English version. Fujiwara has also voiced the young Goro in Darling in the Franxx. 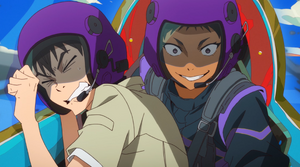 Aby in the cockpit of a plane with Makoto Edamura. 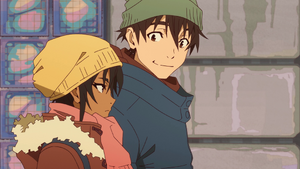 Aby & Edamura on the streets of Paris. 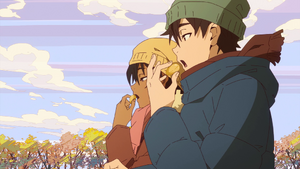