Growing up in the west, Abigail became a prostitute and joined the Van der Linde gang, where she met one of Dutch's protégé, John Marston. Abigail would begin a romantic relationship with John, and she birthed their daughter that passed, and later their son, Jack. Though their relationship became strained due to John being reluctant to become a father, the two reconciled upon the collapse of the gang in 1899. Abigail and John married and raised their son, but John would be forced to work with the Bureau of Investigation to stop their former friends, which would result in his demise. After John's death, Abigail continued to run the family farm and raise Jack until her passing.

Abigail Roberts was born in 1877 to unnamed parents, who presumably died of unnamed causes, leaving her an orphan that had to live in brothels and bars. At a young age, Abigail became a prostitute, and was later introduced to the Van der Linde gang in 1894 by fellow gang member, Uncle. Becoming a member of the gang, Abigail would sleep with most of the gang members due to her status as a prostitute, but she fell in love with Dutch's second protégé, John Marston. She began a romantic relationship with John, and she later birthed their children, an unnamed daughter that passed away, and a son named Jack. After their son's birth, John became distant towards Abigail, as he wasn't ready for fatherhood and didn't believe the child was his.

By 1899, the Van der Linde gang have fallen on hard times due to struggling to survive outside of the law, which becomes central to the gang moving through the mountains following the botched Blackwater heist. While taking shelter in an abandoned mining town, Abigail asks Arthur to find John during a snowstorm, and Morgan reluctantly agrees to do so alongside Javier Escuella. When Arthur and Javier return with John, Abigail scolds him for his actions, and later becomes angry with him when he refuses to connect with their son. After the gang rob a train owned by Leviticus Cornwall, the group move to Horseshoe Overloock as a their new camp, and Abigail continues to assist John connect with Jack.

During her tenure with the gang, Abigail is unable to found Jack at the new camp, and learns that her son has been kidnapped by the Braithwaite family. The gang decide to drop their things to rescue Jack from the Braithwaites, who manage to save him after making a deal with Angelo Bronte. Upon reuniting with her son, Abigail decides to throw a celebration for Jack's safety return and thanks the gang for saving him. Later on, Abigail assists Hosea in coming up with a plan to rob the Lemoyne National bank, and during the robbery, Hosea is captured by the Pinkertons while Roberts escapes. Abigail returned to camp and learned that John had been arrested, and pleads with Dutch to save him. Van der Linde refused, causing Abigail to turn to Arthur and Sadie to save him, which they agree to do.

After John is saved, Abigail starts to see that the gang will collapse soon, especially after Hosea and Lenny's deaths, and decides to steal Dutch's key and starts looks for his money stash. Around this time, Abigail was kidnapped by Andrew Milton, and Arthur and Sadie decide to save her after the rest of the gang refused to do so. When Arthur is held at gunpoint by Milton while revealing that Micah Bell was the traitor, Abigail managed to escape from her bindings and kills the Pinkerton agent. Abigail and Sadie then travel to Copperhead Landing after bidding Arthur farewell, who goes to save John and sacrifice himself to make sure the Marston family survive. Following the collapse of the Van der Linde gang, Abigail and John started to raise their son while trying to run from their criminal past. The family move to Strawberry after John murdered a man at their previous residence, and she and her son get a job cleaning for a doctor.

When John starts to kill again, this time in front of Jack, Abigail becomes angered with Marston for failing to keep his promise, and decides to leave him with her son. Abigail returns to John after receiving his letter to return, and finds that he has mostly changed and bought a ranch for them to live in. She later accepts John's marriage proposal, but becomes concerned when he starts hunting outlaws with Sadie, and later avenges the deaths of his friends by killing Micah. Following this, Abigail and John marry, and the two raise their son while also working on the ranch.

Abigail and John are still running the ranch with Jack by 1911, but she and her son are abducted by Bureau agent Edgar Ross, who extorts John to hunt down Dutch van der Linde, Javier Escuella, and Bill Williamson. Abigail and Jack remained captive by the Bureau while John goes hunting, where Abigail mentions that she made a guard regret making advances towards her. After John eliminates his former comrades, Ross leads an assault on the Marston ranch, but John has Abigail and Jack leave to buy them to escape. Abigail and Jack returned to the ranch and found John's corpse, and mourns him. Despite the loss of her husband, Abigail continued to run the ranch until she passed away in 1914, where she was buried beside John and Uncle by Jack. Abigail and John's son would avenge them by killing Ross, having become an outlaw himself.

Abigail appears as a supporting character in Red Dead Redemption: Undead Nightmare, where she turns into a zombie alongside her son. 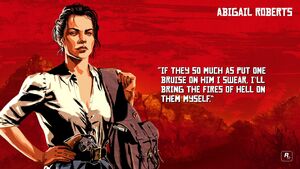 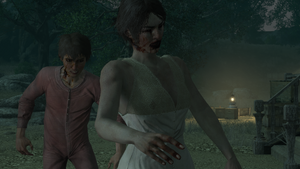 An undead Abigail and Jack in Undead Nightmare.