To kill vampires and other creatures of the night.

Vampire Hunter
Abigail Whistler is a main character in the movie, Blade: Trinity.

She is portrayed by Jessica Biel.

Abigail Whistler is a 18 to 20-year old beautiful young with a muscular physique. Her hair color is light brown and she has hazel eyes.

She is 170 cm tall weigs 60 kg. She has an extremely toned, muscular body; especially her bulging biceps were exceptionally defined.

Jessica Biel who played Abigail followed a strict diet and went through rigorous training for the movie. Although Biel was in good shape to begin with, her training took her to another level. At first she lost over 10 pounds of weight, but when shooting of the movie began she had regained the lost mass as muscles and her body fat had decreased by 10 percent.

Abigail is emotionally closed off and is addicted to combat. She might seem coldblooded, but she does have emotions, even if they are buried deep inside.

Abigail is in peak human physical condition, her immense strength, agility and durability are the result of rigorous and continuous physical training. She can take blows from super powered vampires and is able to fight and overpower several vampires at the same time.

Abigail is an outstanding fighter – possibly the best of the Nightstalkers. She is a superb unarmed combatant and skilled with a myriad of melee weapons and firearms. She is also a master archer. Many of her weapons were specially designed to deal with vampires.

Abigail appears in one movie and comic book. 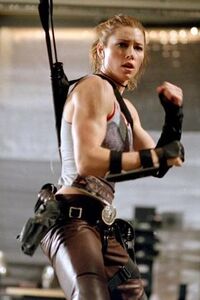 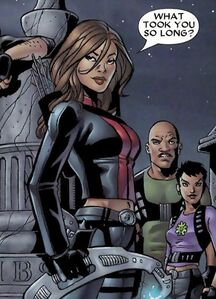 Abigail Whistler in the comics.
Community content is available under CC-BY-SA unless otherwise noted.
Advertisement