Flash of the Multiverse

Not much is known about the Accelerated Man's background, other than he was born in England on Earth-19. He was trained by Red Racer on how to use the Speed Force, later being recruited by him to stop The Dark Monitor.

In the comics, he is responsible for stopping The Dark Monitor (aka Superjudge) alongside the other Flashes of the Multiverse. Nix Uotan, who had become the Dark Monitor, was the youngest and last of the Monitors. Monitors are still considered evil since they also desire to "shape" the multiverse they're born to protect, though Nix was actually a good guy who wanted guard the multiverse from any and all threats. Doing so led him to be defeated by a mysterious group of powerful beings, and was somehow corrupted into submitting to them. Being a godlike super-being, the heroes couldn't use brute strength to beat him. Instead, the Flashes of the Multiverse assembled to free him of the evil forcefield surrounding Nix. Now that he was no longer the Dark Monitor, they saved the world from the Gentry the horrific beings that corrupted Nix, and was thanked by the Harbinger. According to ScreenRant, Accelerated Man only has 4 total appearances in DC Comics, which explains why this is his only story, and why very little is known about him, other than his Speed Force powers. 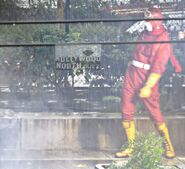 Accelerated Man in The Flash
Community content is available under CC-BY-SA unless otherwise noted.
Advertisement