Rider-class Servant of the Red Faction.

Hero of Mythology
Achilles, also known as Rider of Red, is a major supporting character in the 2012 light novel series Fate/Apocrypha and its manga & anime television series adaptations of the same name.

The hero Achilles was a legendary warrior in the stories of Ancient Greece who participated in the Trojan Wars. Upon his demise, he was deemed worthy of becoming a Heroic Spirit, meaning a mage at any point in history could summon him as a servant to do their bidding.

Achilles is based off of the mythological entity of the same name from Greek mythology. In all media, Rider is voiced by Makoto Furukawa in Japanese and by Joe Zieja in English dubbing. Furukawa has also voiced Saitama in One Punch Man, Taiju Oki in Dr. Stone, Hatsuharu Sohma in Fruits Basket, Miyuki Shirogane in Kaguya-sama: Love Is War, and Benimaru in That Time I Got Reincarnated As a Slime. Zieja has also voiced Claude von Riegan in Fire Emblem: Three Houses.

Character concept sheet of Achilles for the anime adaption of Fate/Apocrypha. 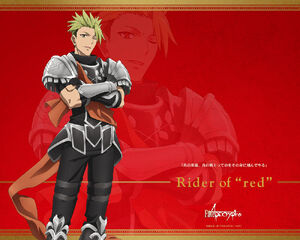 A-1 Pictures anime wallpaper depicting Rider of Red.
Add a photo to this gallery

Retrieved from "https://hero.fandom.com/wiki/Achilles_(Fate)?oldid=2279403"
Community content is available under CC-BY-SA unless otherwise noted.