Plants vs. Zombies: Battle for Neighborville

Defeat all Zombies and take back Neighborville.

Acorn is a plant with the same name who has a removable head with a gun on top of it. He also has four leaf-like legs to help him move around faster. His eyes are yellow with black pupils.

Oak is a tree that has large eyebrows and mouth. His right hand is a log that allows him to shoot wood griefs. He also has two branches with leaves on him, and two legs to help him move.

Acorns and Oaks appeared in the comics to help Nate Timeley and Patrice Blazing rescuing the kidnapped plants. 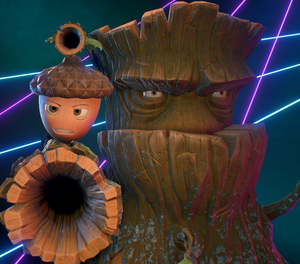 Retrieved from "https://hero.fandom.com/wiki/Acorn_and_Oak?oldid=1770684"
Community content is available under CC-BY-SA unless otherwise noted.