Researching on the occult.

Helping Oz as best as she can.

Supportive Sibling
Ada Vessalius is one of supporting characters of Pandora Hearts. She is niece of Oscar Vessalius and sister of Oz.

She is voiced by Kaori Fukuhara in the Japanese Version.

She adores him very much. Her affection and feelings towards Oz did not change at all during the time they were separated.

When she learns truth about her true brother and Oz being Chain, she refused to deny Oz as her brother, not caring about what Oz really is because he's still her brother as far as she's concerned, showing how pure Ada's relationship is with those she considers to be family.

After 10 years she attends Lutwidge, a prestigious school for nobles, of which she is a prefect. She keeps in contact with Oscar via letter and causes Oz and his friends to sneak into Lutwidge as she wrote that she has found a person she likes. It is revealed that she was the one who gave Gilbert Nightray his precious hat, that made Oz and Oscar think that Gilbert is the one that Ada likes. Then she asked Oz to let her be the one to return Elliot's bag, but when Oz said that he will return Elliot's bag by himself, Ada was slightly disappointed.

In final chapter, Vincent hoped that Ada would find happiness someday with someone else. Vincent is then shown watching Ada from afar as she enjoys her life with another man, smiling before taking his leave just as Ada looked up in his direction.

Gilbert mentions that the seasons continued to change as time went by, and they'd have to say goodbye to their dear friends (herself, Sharon Rainsworth & Reim Lunettes) - but their souls would enter the Abyss until it was time for them to return once again.

Ada's first appearance after Oz was thrown into the Abyss. 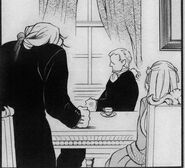 Ada and Oscar learning about the true origin behind Oz.

Ada's death due to old age.

Ada before Oz was thrown into the Abyss.

Ada and Oz playing together.