Superhero
Adam Kent is an Elseworlds Character who first appears in the JLA Two part mini series JLA: Created Equal he is the son of Superman and Lois Lane.

Adam was born shortly after a plague began to kill all men on the planet. Later Adam and his new brothers and sisters were taken to be raised by the Amazons when it became evident that the human mothers couldn't handle babies with half the powers of Superman. As a teenager, Adam was convinced by Lex Luthor to revolt against being raised by women as men were superior, and rallied his brothers to fight against the Amazons and the all-female JLA.

This umbrella ability includes the following: Electromagnetic Spectrum Vision: Adam Kent can see well into most of the electromagnetic spectrum. He can see and identify radio and television signals as well as all other broadcast or transmitted frequencies. Using this ability, he can avoid detection by radar or satellite monitoring methods. This also allows him to see the aura generated by living thing.

Infrared Vision: Adam Kent can see with better acuity in darkness, and to a degree in total darkness.

Superhuman Strength: Adam Kent's strength is augmented by yellow solar radiation interacting with the greater than human density, resilience and biological efficiency of his musculature. His strength is more an act of conscious will on energy fields than actual physical strength. It is this act of conscious will that enables him to perform physical feats that are beyond the mere application force, such as moving a mountain top without said rock crumbling under its own mass. 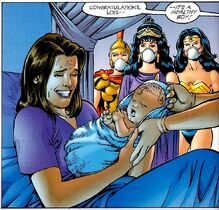