Adam Strange is a science fiction superhero in DC Comics and universe. He is an archaeologist who was transported to the planet of Rann, where he became a hero who protected Rann from threats.

He was created by Julius Schwartz and Murphy Anderson, and first appeared in Showcase # 17 in November of 1958.

Adam used to be an archaeologist before he was accidentally teleported away from a dig site on Earth to another galaxy. There, he found himself on the planet called Rann, and the tech that had transported him was called Zeta Beam. A Rannian scientist explained to Adam that he needed his help in protecting the planet. Though initially bewildered, Adam happily obliged as he found the adventure and made his life goal as the savior of the Rannian people as well as the galaxy.

Adam Strange is the of unnamed parents and the brother to Janey and Todd Strange, and he later became an archaeologist.

One day while working on a dig in Caramanga, he was transported to the planet of Rann from the Zeta-Beam. On the planet, Adam befriended the alien race, the Rannians, and took up a flight pack and ray gun to assist them. While there, Adam also fell in love with Alanna, the daughter of Sardarth.

When the Zeta-Beam's teleportation effect wore off, Adam was returned to Earth, but he was able to return by following a schedule of where the beam would next hit. Adam would schedule his archaeological trips to connect with the beam, and later married Alanna.

Adam met the Justice League of America and helped them battle Kanjar-Ro, and later declined a membership offer to the team. He continued to help the Rannians and improved relations between them and Earth, and he was later falsely informed that Alanna had died during childbirth. He later reunited with his wife and their daughter, and prevented an invasion on Rann before being returned to Earth. Later on, Adam was told that Rann was destroyed in a super nova, but Sardath teleported the planet to a different universe via an upgraded zeta device called an Omega-Beam.

In 52, Adam was stranded on a planet with Starfire and Animal Man after fighting Superboy-Prime and Alexander Luthor, and the incident caused Adam to lose his eyes. Several weeks later, Adam was able to get his spaceship working and the group departed for Earth, but were attacked by Devilance. The group were pursued by Devilance, and Lobo appeared to destroy him, and agreed to help Adam out.

On Prime Earth, Adam Strange was born in Canada and became an archaeologist and college teacher, and later began a relationship with Alanna Lewis. Adam would become a member of the Justice League United, and the team were later transported to Rann by Allana's father, Sardath.

Adam is quite skilled with hand-to-hand combat. Likewise, he is good at tracking his enemies to their particular location. Adam has good marksmanship, as he handles the blast guns quite well. He used to have the ability to teleport and manipulate all forms of energy before he was depowered. 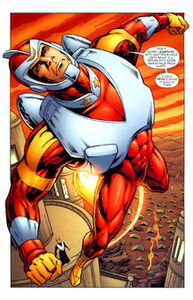 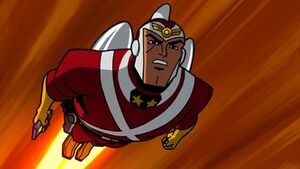 Strange in Batman: The Brave and the Bold. 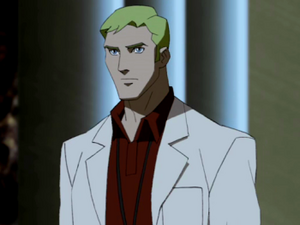 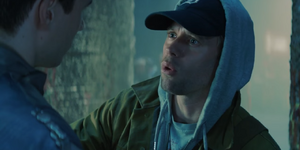 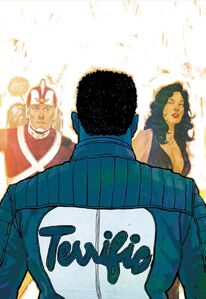