Existentialistic monologues.
Expanding his intelligence and his knowledge.

Defend the cosmos.
Fulfill his true destiny.
Expand his intelligence and knowledge.

Adam Warlock, originally known as Him, is a fictional character that appears sometimes as an anti-hero and as a protagonist in comic books published by Marvel Comics. Debuting in the Silver Age of comic books, the character has appeared in over four decades of Marvel publications, and starred in the popular titles Marvel Premiere and Strange Tales as well as five self-titled volumes and several related limited series.

A humanoid created by the Enclave under the name "Him", the being that would be known as Adam Warlock was given guidance under the High Evolutionary before being a champion of Counter-Earth. Warlock would soon play pivotal in protecting the universe from numerous threats, such as his enemy Man-Beast and his nemesis and sometimes ally Thanos. Powerful yet mysterious, Warlock is destined to act as the avatar of life yet faces against his evil future self, Magus and his destructive counterpart, Goddess. He has founded the Guardians of the Galaxy and Infinity Watch, and has been a member of the Cosmic Avengers.

The character first appeared in Fantastic Four #66 in September of 1967 in cocoon form, and #67 in October of 1967 in humanoid form, and was created by the late Stan Lee, and the late Jack Kirby.

The humanoid being that would be known as "Warlock" was created by the Enclave, a group of evil scientists who wanted to create human perfection for their own self interests. Known as "Him", he would be birthed from his caccoon and immediately realized that his creators wanted to use him, and escaped from the Enclavea after attacking them. He came across the Asgardians Thor and Sif, and attempted to mate with the latter, but was stopped by the god of thunder. Greatly damaged from the battle, Him escaped from the two and returned to his caccoon to regenerate.

He was then reborn and given the name "Warlock" by the High Evolutionary, who decided to adopt him and give him guidance. After receiving enough teachings from the High Evolutionary, he was given the soul gem and was allowed to journey across the galaxy. Traveling to the Counter-Earth, Warlock met a group of humans who gave him the name "Adam", and came across Man-Beast, who would become one of his greatest enemies. Due to his heroics, Adam became the Counter-Earth's first superhero, helping his allies rid the Earth of Man-Beast's presence. During his tenure on Counter-Earth, Warlock came across his evil-self Magus, whom he battled and defeated with the assistance of Gamora, Thanos and Pip the Troll. Despite their victory, Magus wouls till be born in the future, so Thanos sent Warlock two years there and had him trap Magus into the soul gem.

After having encounters with the Star Thief and nearly being enslaved by the soul gem, Warlock traveled to the milky way and encountered Spider-Man, who helped him defeat the Stranger. Following these events, Warlock would learn from Gamora of Thanos' plans to court Lady Death by destroying all life. Wanting to stop the titan, Warlock traveled to Earth and managed to receive the help of the Avengers, who decided to attack Thanos on his ship. Warlock was defeated and his soul was placed into the gem, but would come out to kill Thanos, thus ending the mad titan's threat. Adam decided to remain in the soulworld with Gamora and Pip the Troll, but would return to stop Thanos once again. During the fight against Thanos, Warlock worked with the titan after Nebula gained the Infinity Gauntlet since he lost his divinity.

Adam would succeed in obtaining the Infinity Gauntlet from Nebula, but was convinced by the Living Tribunal that he wasn't worthy to reach godhood. Seeing this, Warlock divided the gems (keeping the soul gem for himself) and gave the other stones to Gamora, Pip the Troll, Drax the Destroyer, Moondragon and Thanos. Afterward, Adam founded the Infinity Watch, a group of individuals who would defend the gems from those who wished to misuse them, such as Man-Beast and Triax, or other foes such as Mephisto and Maxam. During his leadership, Warlock learned of Goddess, a being that was his "good" self that wanted to destroy all life in the universe to eradicate sin. Seeing that she was a threat, Warlock worked with Thanos again and they were able to send Goddess into the soul world.

During the "Annihilation: Conquest" storyline, Warlock re-entered his regenerative cocoon after being driven mad by the souls of billions going to the gem. Before he entered his cocoon, however, Adam came across Thanos' corpse, and decided to have him be cocooned as well since he knew that the titan balanced his evil side. He would be awakened early by Moondragon and Phyla-Vell, which angered the amnesiac being until he decided to help them evade the Phalanx. Adam explaiend why he didn't appear during the Annihilation war, but also realized that he was the chosen one to be the savior of the Kree. Afterward, Warlock helped Qusar, Star-Lord and Nova defeat Ultron, who was helping the Phalanx's.

After defeating Ultron, Adam decided to help from the Guardians of the Galaxy, supporting the idea since he knew that the galaxy needed defenders after the Annihilation wave caused great damage. When the Inhumans unleashed the T-bomb that caused the fault, Warlock used all of his powers to stop it, and brought back Magus due to having to use the unushed universe to prevent the destruction of his universe. Adam would turn into "Adam Magus" due to being in an weakened state, which led to Kang the Conqueror to recruit heroes to go back in time to prevent the transformation. Star-Lord was able to have Adam return back to his normal state, but he then ordered Quill to kill him to prevent Magus' return. However, it was later revealed this was a trick by Magus so he could return and cause the death of Thanos with the Many-Angled Ones. Magus would be stopped by the Guardians of the Galaxy and Mar-Vell of Earth-10011, who proceeded to kill him.

Warlock would return for the "Infinity Wars" storyline, where Gamora was claiming the gems so she could reunite with herself in the soul world. After resurrecting himself with the regenerative cocoon, Warlock came across Devondra in the soul world, and was assisted by Emma Frost in gathering others to help him fight it.

Adam Warlock is often portrayed as both an anti-hero and both as a protagonist, and very minor times as a villain. However, he has an extremely unique personality which people find very confusing; he is an extremely powerful individual, depicted as a godlike being, which uses his mighty powers to defend the universe and to know more about his true destiny using his vast intelligence, which he mainly seeks to expand more and more, which means that he is really intelligent, wise, and sophisticated.

Additionally, Warlock isn't knowing how to find the way in which he could become a true hero like the Avengers or the Guardians of the Galaxy team. He just wants to do it by his own ways; to seek his destiny alone, without nothing interrupting him to do so. He uses his powers to travel the cosmos, and strives to find more and more knowledge, which means that he is having such an amount of great greed for knowledge.

For that reason, Warlock always will go to find his true destiny, and only small times, he will arrive to Earth to assist many heroes such as the Hulk or Thor Odinson. His godlike appearance is depicted for almost all the times he has appeared in comics, coming from the fact he really is a god from outer space like Thor himself.

Both of those things which stated above are implying that Warlock is maybe destined as the personification of anti-heroism, acting in many other ways which differs the other heroes.

As a villain, he will always going to act as all villains are acting. But ,it is very important to remember that Warlock isn't a villain or a hero, so his true status as a character is left as a true mystery.

Adam Warlock made his first live-action debut in the 2017 MCU film Guardians of the Galaxy Vol. 2, being created by Ayesha, the High Priestess of the Sovereign.

It has been confirmed that Adam Warlock will physically appear in the upcoming 2023 MCU film Guardians of the Galaxy Vol. 3. He will be portrayed by Will Poulter, who also played Eustace Scrubb in The Chronicles of Narnia: The Voyage of the Dawn Treader, Kenny Rossmore in We're the Millers, Gally in The Maze Runner and Maze Runner: The Death Cure and Andrew, Anthony Clarke and Abraham Alastor in The Dark Pictures Anthology: Little Hope. 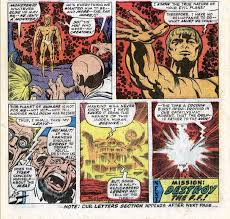 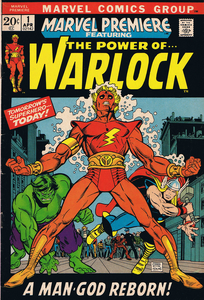 Warlock during the Counter-Earth saga. 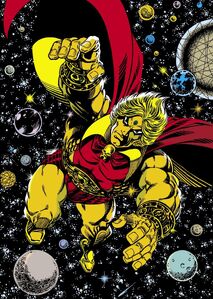 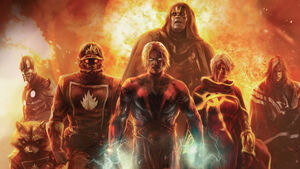 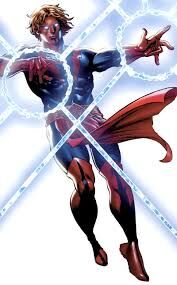 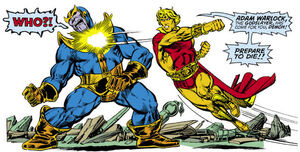 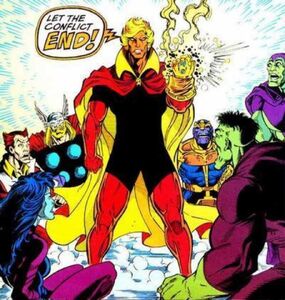 Warlock with the Infinity Gauntlet. 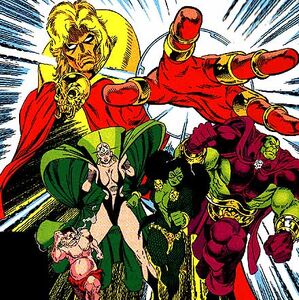 Warlock and the Infinity Watch. 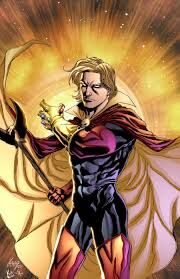 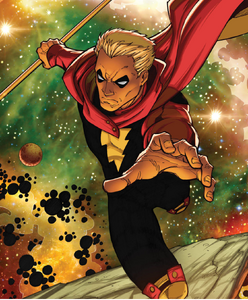 Adam in the Infinity Countdown. 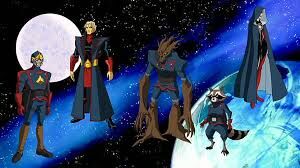 Adam Warlock with the Guardians of the Galaxy in The Avengers: Earth's Mightiest Heroes. 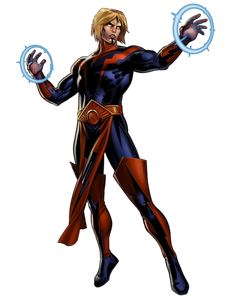 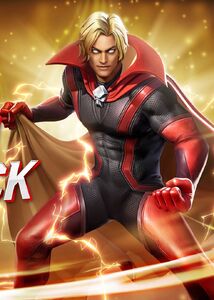 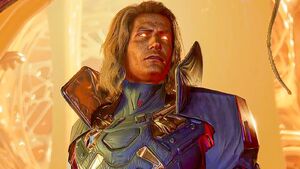 Adam Warlock in Marvel's Guardians of the Galaxy video game. 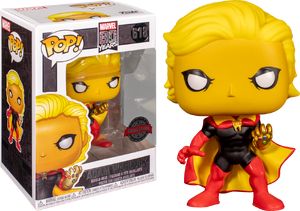 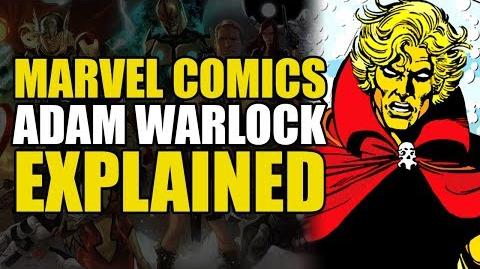 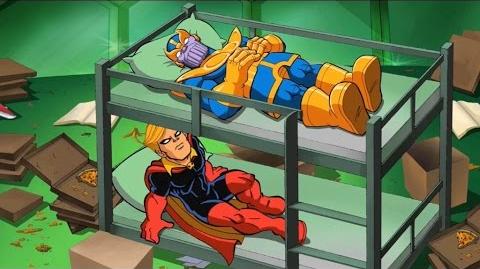 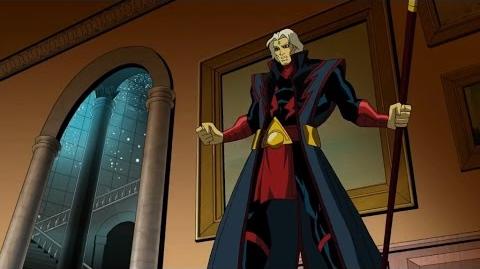 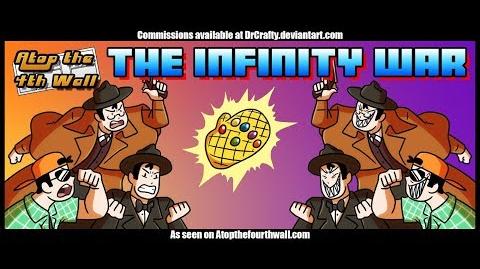 The Infinity War - Atop the Fourth Wall