Addisso is one of the playable heroes from Hero of Robots. He is the younger brother of Jassky. He is the pilot of Fire God.

Addisso is a hotheaded guy, who likes destroying enemies in his way to victory. He sometimes wrathful and vengeful, even if the robot-pilot heroes were killed likes child warriors, etc. Addisso can be encouraged to protect his friends and family against evil forces of the Legion of Doom.

A junior high freshman with the blood of a violent race known as the salamanders. It is said that such people can control fire and speak with the fire god to borrow his powers in battle. 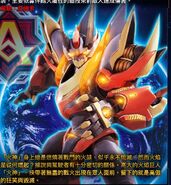