Can animate her own drawings

Supporter
Adeleine (アドレーヌ (Adorēnu) is one of Kirby's friends in Kirby 64, making her first appearance in the game when Kirby and his friends are passing by her home.

Adeleine is an artist who makes her home on Planet Popstar.  Her lack of dialogue makes her personality largely unknown, but she is rather peppy, like Ado was in Kirby's Dream Land 3. She has the ability to paint things and make them come to life to help Kirby on his adventure.

Adeleine first appears in the second stage of the first world, Planet Popstar. She is simply painting a picture when a Crystal Shard falls next to her. She turns and picks it up, when a Dark Matter materializes on her easel and possesses her. Kirby, Ribbon, and Waddle Dee then arrive to find her possessed, and are forced to battle her.

Adeleine summons various monsters from Kirby's past, much like Ado, her counterpart in Kirby's Dream Land 3 as well as a mass of pixels and an unidentifiable, Gordo-esque enemy. Unlike Ado, whose paintings can't be inhaled, only 2 out of 10 of Adeleine's paintings can't be inhaled. The only thing that changes in Adeleine's possessed form is her eyes. Adeleine has bigger eyes when possessed, and has a different iris colour. After Kirby and the gang defeat Adeleine, she agrees to join their team and the three set out to find the rest of the Crystal Shards.

Throughout various levels of the game, Adeleine will appear and paint items for Kirby. If Kirby enters the area Adeleine is in with full life, she paints a 1UP, otherwise she paints a Maxim Tomato. She may also paint pictures to help Kirby solve puzzles so he can obtain a shard.

Adeleine later appears in Kirby Star Allies as a special ally called a Dream Friend.  She is paired with Ribbon, and their moveset typically revolves around Adeleine's artistic moves, though some exceptions, such as Ribbon's Crystal and Fairy Dance, exist. 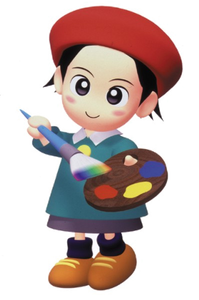