Can animate her pictures

Damsel in Distress
Ado is a character appearing in Kirby's Dream Land 3 who meets Kirby while the latter is on his quest to save Dream Land.

Ado is an artist who can bring her creations to life. Ado's personality is not known much, however she shows creative characteristics. When possessed by Dark Matter, however, she turns cruel and sadistic.

Ado is the boss of Cloudy Park. Using her giant canvas, she paints various bosses from Kirby's Dream Land 2 as guardians to protect her. Upon their defeat, she enters the ring to fight Kirby herself.

Interestingly, Ado can be knocked out in a single hit. A slide attack is enough to knock her health down to 0.

Ado was mistaken to be a male moments after her debut until a press conference revealed that she WAS female. Before this, she was stated to be a Bishonen (Male person with feminine physical traits, regardless of their personality). This ambiguity was due to the fact that she was not revealed to be either sex prior to the press conference. 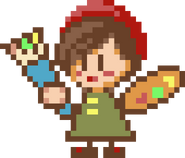 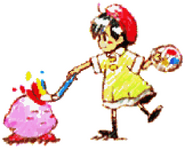