Adolin Kholin is one of the heroes in The Stormlight Archive series. He was the Prionce of Kholin; but later promoted to Highprince of Alethkar.

During warfares, Adolin is in fact a very nervous and shy girl where his friends did most of the talking and cheering him up, giving his strength. However, in an ensuing battle with enemies, He accepts the heroic duties to protect them. He is determinable to practice heroism before becoming either princes or kings. 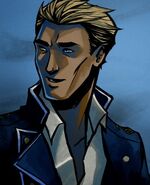