Heroes Wiki
Register
Don't have an account?
Sign In
Advertisement
in: Video Game Heroes, Comedy Heroes, Friend of a Villain,
and 22 more

The Adventure Core, also called Rick, is a corrupted core in the game Portal 2, he appeared in the final boss battle and was used to defeat Wheatley.

The Adventure Core is an energetic robot who would always like to do something adventurous. The Adventure Core, also known as Rick loves talking about going on adventures. He also likes to talk about his black belts. He has a very confident and boisterous personality, and even subtly hits on Chell. 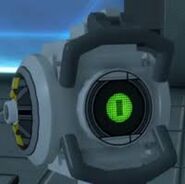 The Adventure Core in Lego Dimensions.

The Adventure Core in the battle to defeat Wheatley.