Helen Harris (aka) Aech is one of the overarching protagonists for Ready Player One and a gunter whose best friends with Wade Watts (aka) Parzival to the OASIS.

She was portrayed by Lena Waithe, in her major film debut.

Aech (pronounced as the letter 'H') is a main character in Ernest Cline's Ready Player One. Aech has been Wade's best friend for years, although the two didn't meet in-person until much later. Wade claims that they've always shared a great connection. In the beginning, it is clear that Wade and Aech shared many interests — movies, music, video games, and the hunt for Halliday's egg.

Their shared quest for Halliday's egg brought about friendly competition. Aech and Wade would spend their time together discussing pop culture, Almanac findings, the hunt, and girls.

In the real world, Aech is a heavy-set African-American named Helen Harris. Helen uses a Caucasian male appearance and voice for her OASIS avatar in order to be more easily respected by her peers.

Within the OASIS, Aech is a PvP (player versus player), a competitor. In the movie, Aech is also a builder and a repair guy who people pay a ton of money. Wade notes that his friend is one of the highest ranked members in both the Deathmatch league and the Capture the Flag league, making a "quite a bit of dough" in the process. This partially explains how Aech is able to afford the large chatroom, the Basement. It is also mentioned, at the beginning of the novel, that Aech is more famous than Art3mis.

In the book, Aech's avatar is a tall, broad-shouldered Caucasian male with dark hair and brown eyes. Wade once asked Aech if this avatar represented a real-life appearance; Aech responded by saying: "Yes. But in real life, I'm even more handsome."

In the film, Aech's avatar is a cyborg orc that wields Mater Chief's gun.

Helen, or Aech, is an intellectual, dedicated individual. This can be observed by their highly competitive ranking within the OASIS, their "elite" knowledge of video games and pop culture that rival Wade's, and their long-term hunt for Halliday's egg. They also appear to be quick-witted and humorous. This is demonstrated by their exchanges with I-R0k and Wade in the Basement. 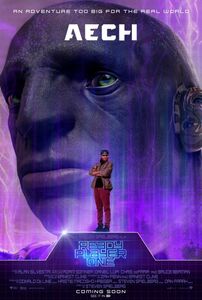 Aech/Helen Harris on a promotional poster.

Aech, Parzival & Art3mis in a promotional poster parodying the poster of Beetlejuice.

Aech, Helen's avatar in the OASIS.

Aech and Parzival, prior to the Race for the First Key.

"This is my workshop. Touch nothing."