Flower Lady (by Marlene)
The Flower Girl
The Ancient
The Cetra

Medium of the planet

Discover the secret of the Cetra.

She is voiced by Maaya Sakamoto in Advent Children.

Aerith wears a shin-length pink dress that buttons up the front and a red bolero jacket. She wears brown boots and metal bracers on her wrists and around the edges of her jacket sleeves. In all her appearances Aerith's long light brown hair is plaited with a large pink ribbon; within the ribbon she keeps the White Materia orb given to her by her mother. Segmented bangs frame Aerith's face and she has emerald green eyes.

Aerith is upbeat and joyful, and several times in Final Fantasy VII attmpts to cheer up her fellow party members. As she was raised in the Midgar Slums, Aerith maintains that she can take care of herself and can fight off Shinra troops, as well as demonstrating more subtle forms of savvy. Aerith is flirtatious with Cloud and possesses a carefree and naive nature, expressing a desire to fly on an airship when the party sails out of Junon.

When Aerith has made up her mind about something she will not listen to anyone who tells her otherwise. Though she means well, Aerith can be insensitive to other people's problems, like when Barret is troubled in the Gold Saucer. Aerith and Tifa often spend time together when the party splits up and are good friends, though Aerith expresses slight jealously when she discovers how close Tifa is to Cloud. 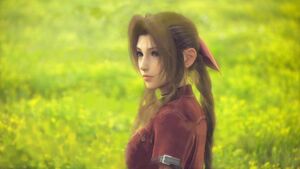 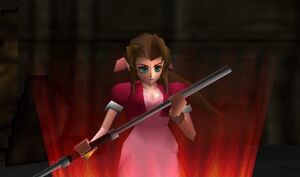 Retrieved from "https://hero.fandom.com/wiki/Aerith_Gainsborough?oldid=1378732"
Community content is available under CC-BY-SA unless otherwise noted.