Agate Crosner (アガット・クロスナート Agatto Kurosunaa) is one of the main protagonists of the trilogy of the Legend of Heroes: Trails in the Sky series. During the first game, he pops in at several intervals throughout Joshua's journeys in order to aid them with the main story. In the Japanese version, Tita calls him "oni-chan". Known as brother.

It was later revealed that he was a former member of the Ravens group, a group of punks that Joshua's team encountered several times throughout the the course of the story... including the fight at the Grancel Arena. Fortunately, Estelle's father stopped him.

Now, he works as a senior bracer and fights with Joshua's team

Tita wanted to see her grandpa, so she foolishly put her life in harm's way in order to do it. Unfortunately, it was at the expense of Agate getting hit with a poisonous bullet. Due to this event...Joshua, Estelle, Tita and Zane were tasked on finding a moss that only grew in the Limestone cavern.

While it wouldn't get rid of the toxin, this would only suppress it. And Agate's nervous system have a fighting chance against the toxin.

He comes off as a tough guy, not wanting to admit that he's wrong at times. Sometimes he may send the wrong message when he's within Joshua's team.

Still, this is not to say that he is a bad guy. In SC, his attitude is more toned down. Being now like a caring brother to the team. This' thanks to Tita watching over him.

About 100% of his abilities are focused on the offensive side. Where he also uses half to cast curative and supportive arts on his team.

Wild Rage 2 is a Craft ability that axes half of it's user's HP in order to power his CP gauge. If he is not able to meet the HP requirement, he would get knocked out instantly. In this case Agate is one of the fighters that gains such ability, along with Gaius Worzel.

He assaults his opponents that are within attack range in a single line.

He targets a single person and combos them, landing several devastating hits.

He jumps into the air, followed by a fast dive. Thus landing an all out an attack on all enemies that are in attack range.

Gamers get introduced to him for the very first time. He comes off as a lone-wolf type fighter. Not wanting the help of young bracers. Young bracers such as...Joshua and Estelle

Eventually, he develops into a more respected ally. Though, he still shows remorse of them becoming Bracers. Even so with Tita, due to the fact that kids her age tend to be an easy target for Rocco's gang, even the Imperial forces. Which they use hostages to get their point across.

We see more of his tough guy attitude on display. But unlike the the first game, it's a bit more toned down. In this sequel, players get the option to choose between him or Scherazard as one of the selectable fighters upon Estelle and Anelace touching down in Grancel and they head to the Bracer guild.

As with every person that Kevin recruits, gamers also get to see a bit of Agate's back story. Of how he came into fighting alongside the Ravens.

Story: Out for Revenge - SC

During Lowe's invasion in Bose, Agate takes it upon himself to track him down. After assisting the folks and getting things in order, Joshua and team first aid the folks at the Bose market. Then they give chase which they're lead to the Abandon Mine at the back of Ravennue Village.

A Falcom magazine scan has also revealed that Agate will join Tita in Erebonia. This will be their first time in the continent. Tho, unlike the new Class VII. His objectives is shrouded. 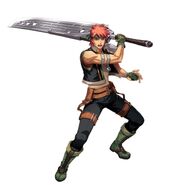