Ageha Chono is the main character from Wizard Barristers, is the senior partner of the Butterfly Law Offices, which deals with lawsuits regarding illegal uses of magic. Despite being a benmashi; or "wizard barrister", she cannot use magic herself, being just an ordinary human.

She is voiced by Ayumi Tsunematsu in the Japanese version, and by Shelley Calene-Black in the English version who also voiced Nobara Yukinokōji in Inu x Boku SS, Mireille Bouquet in Noir, Ais Wallenstein in Is It Wrong to Try to Pick Up Girls in a Dungeon?, Yuriko Takagi in Highschool of the Dead, Luviagelita Edelfelt in Fate/kaleid liner Prisma Illya, Najenda in Akame Ga Kill!, Medaka Kurokami in Medaka Box, Canaan in Canaan, Cortana in Halo Legends, Kyou Fujibayashi and Yuki in Clannad, Tomika Amato in Maken-Ki!, Narvi Stryze in Break Blade, Rei Wakana in BanG Dream!, Naomi in Girls und Panzer, Rutile in Land of the Lustrous, Misery in Gate: Thus the JSDF Fought There, Anna in Sunday Without God, Saki Kirishima in Dream Eater Merry, Kuroko Smith in Monster Musume: Everyday Life with Monster Girls, and Lyza in Made in Abyss.

Ageha is a bossy woman, and unlike her brother, is calm and collected. She is not above breaking the law in order to achieve a desired outcome. This is seen when she uses illegal magic in order to help Cecil to prove her client was not guilty. She also takes pleasure in bending the law to her advantage, tending to use article 10; ("Magic may be used if it can be proven it was used for the greater good") of the magic prohibition act to get out of legal ramifications of her or her employee's actions.

She is very work focused, and likes to take difficult cases. However, she admits she does not take on cases that she knows from the start she cannot win. She also will take on the defense of someone she knows is truly guilty - Which is shown when Cecil asks Ageha if she would defend a serial killer that Ageha knows tried to kill her, and she says she would. This makes her morals as a lawyer questionable in one sense. However she does not do her job for the money, but because she believes wizards deserve a fair and proper defense and are unfairly discriminated against, which makes her more justice-oriented then anything else. 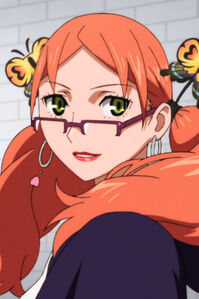