Wise Warrior
Agen Kolar was a Jedi Council member in the Star Wars franchise. He is a Zabrak who was known in the Jedi Order for his skill as swordsman.

When Obi-Wan Kenobi was assigned to track down Jango Fett, he followed the bounty hunter to the planet Geonosis. After arriving on the planet, he learned that the Separatists were creating a droid army on the planet. He activated his hologram to contact the Jedi Order and the Republic about his findings. In the middle of the transmission, Obi-Wan was ambushed by droidekas and taken prisoner. Obi-Wan's padawan Anakin Skywalker and Padme Amidala came to Geonosis to save Obi-Wan after receiving his transmission but they were captured too.

After the three were taken to the Arena, Mace Windu arrived with a strike team to free them and fight the Separatists. Kolar was a member of the strike team and is shown to be fight against the battle droids. The former Jedi Master and Separatist leader Count Dooku had his droids surround the Jedi who were saved by Yoda and the clone trooper reinforcements, causing Dooku and the Separatists to retreat. After the battle, the clone troopers were instated into the Republic with the Jedi serving as their generals.

Three years into the war, Kolar replaced Jedi Eeth Koth as a member of the Jedi Council when Koth was forced to step down. When the Clone Wars were coming to an end, Windu selected Kolar to help him confront Chancellor Palpatine after Anakin revealed to Windu that Palpatine is the Sith Lord Darth Sidious. As they entered the Chancellor's office, Palpatine activated his lightsaber and jumped from his desk murdering Kolar and Tiin. The other 2 masters and most of the Jedi order also perished.

Agen Kolar was known to strike first and ask questions later. He was also considered a valuable member of the Jedi Council. Mace Windu had a high opinion of Kolar's combat skills, which led him to recruit the Zabrak in the attempt to arrest Supreme Chancellor Palpatine. 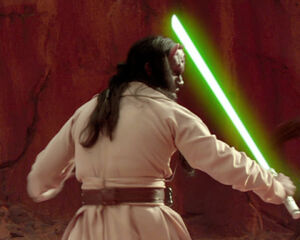 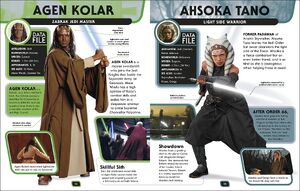