Member of the New Squidbeak Splatoon

They are an inkling who happened to stumble upon Cap'n Cuttlefish's base in Octo Valley. They were recruited as an agent of the New Squidbeak Splatoon, and helped him infiltrate the valley and rescue the Great Zapfish from the Octarians. They would later encounter Agent 8 in the Deepsea Metro.

Like the rest of the inklings, they are voiced by Yuki Tsuji.

Agent 3 is an inkling who wears a black hooded coat, a high-visibility jacket, black shorts with yellow stripes, black and yellow shoes with blue glowing spots, and black ear protectors with blue spots, as well as a cape with a symbol resembling the number 3. Their ink colors can vary significantly, but are mainly either green or yellow.

While brainwashed by Commander Tartar, they have turquoise ink, with spiralling turquoise eye patterns and a swirl of sanitized ink covering their left ear protector. As Inner Agent 3, they are mostly the same as their original form, but now has orange ink colors. As a captain in Splatoon 3, they now wear Cap'n Cuttlefish's cap and poncho, as well as ragged black tights and sandals with a similar design to their shoes.

Agent 3 starts out as an ordinary inkling living in Inkopolis Plaza, up until they come across Cap'n Cuttlefish peeking out of a manhole. They follow him down it and find themselves in Octo Valley, where he confides to them that the Great Zapfish, a giant catfish that serves as Inkopolis Plaza's power source, has been kidnapped by DJ Octavio and his Octarian army. He recruits them as an agent to stop them and reclaim the Zapfish. They would ultimately go on to reach the Octarian base, with the added help of Squid Sisters, and manage to recover the Zapfish, as well as defeat Octavio and imprison him in a snow globe.

Agent 3 doesn't appear in the base game of Splatoon 2, with Agent 4 taking their role as player character instead. However, they are mentioned in the 25th Sunken Scroll, where they are stated to have travelled to a cape with Cap'n Cuttlefish for research purposes. It is their that they presumably encounter and battle Agent 8, before being trapped in the NILS statue and separated from 8 and Cuttlefish, as shown in Octo Expansion.

Eventually, 3 would reach the Deepsea Metro and subdue Commander Tartar before they are able to shred 8 and Cuttlefish, but is knocked unconscious in the process. 8 goes ahead to find a way out, while Cuttlefish stays behind to watch over 3. However, Tartar reawakens uses the sanitized ink to hijack 3's mind, making them tie up Cuttlefish and catch up with and battle 8. However, 8 defeats them and frees them of their brainwashing, rendering them unconscious again. The two are rescued by Off the Hook, and 3 wakes up after Tartar and the statue are destroyed, to which 8 gives them an endearing gaze.

Agent 3 reappears as the secret final boss of the expansion, as Inner Agent 3. The boss battle is a harder version of the previous brainwashed battle. When 8 defeats them, they receive the

Agent 3 will return in the upcoming Splatoon 3, specifically in its Return of the Mammalians story mode, where they have now become the captain of the Squidbeak Splatoon, following Cuttlefish's retirement, and will be training the New Agent 3 with the Squid Sisters' help.

The end of the first Splatoon game's credits, with artwork of both a female and male Agent 3. 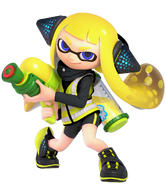 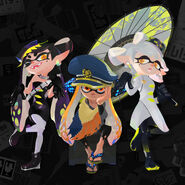 Agent 3 as a captain in Splatoon 3, flanked by the Squid Sisters.