Agent 9 is a space monkey native to Agent 9's Lab. He started out life as a lab monkey for the Professor, but then was given a laser blaster and taught how to fight. He first appeared in Spyro: Year of the Dragon, and was playable in two subsequent games.

He is voiced by Richard Tatum, who also voiced Countdown in Skylanders: Swap Force.

In his original form, he has a light green outfit with black boots, a purple helmet with red fin, red gloves and shoulder guards, no sleeves, and his fur is a light brown; plus his laser blaster is futuristic.

In his reignited form, his outfit now has sleeves and a "No Rhynoc" picture. He keeps the red gloves, but his helmet is now grey and he has monkey fangs when he talks. Also, his blaster is red and grey with a yellow light in it, not sci-fi.

Agent 9 is very intelligent and has accurate marksmanship. He is quite sufficient at fending off many Rhynocs without being overwhelmed. He also single handedly cleared out a Rhynoc infested area of the Fireworks Factory, defended his homeworld from attack, and survived the five trials of the Haunted Tomb.

Agent 9 is also able to throw bombs from a bomb dispensing machine. In the Fireworks Factory, Agent 9's laser blaster is upgradable to a machine gun with 500 rounds. 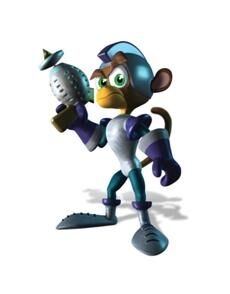 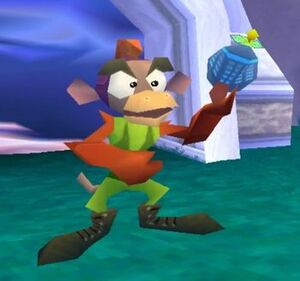 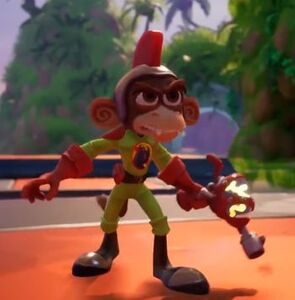