A special agent of the U.S. government; Head of the Earth Protection Force

Kidnap the Turtles to dissect them in order to learn the secrets behind their mutation (abandoned).
Protect the Earth from interdimensional threats.

He is a secret agent of the U.S. government and the head of the Earth Protection Force who plots to use the Ninja Turtles DNA to create an army of genetically enhanced super soldiers in order to create a superior race of mankind to save the Earth of alien invasion.

He was voiced by David Zen Mansley.

Bishop first appeared during the Triceratons invasion of Earth for Professor Honeycutt where he is talking to a mysterious villain of the Turtles and of the Triceratons.

He orders his men to capture the Turtles and Professor Honeycutt alive. They are taken to his lab where Bishop says he knows about them, including their names. It turns out he made an alliance with General Blanque of the Federation into handing over Honeycutt in exchange for the Turtles. With them on his side, Bishop plans on dissecting them for mutant DNA. He battles the Turtles, Splinter, Leatherhead, April, and Casey, and gets the upper hand on them. Then he escapes with the DNA samples, but not before declaring they'll meet again.

Next, he kidnaps Karai, and threatens Oroku Saki aka the Shredder into giving him his work in exchange for her safety. However, instead of surrendering, Saki sends Hun to retrieve Karai. Bishop fights the Turtles with Hun and Karai, and appears to get the upper hand again. He escapes again.

Bishop kidnaps Splinter, the Turtles' master, for his rat DNA to be part of his slayers. While in the fight, Bishop is thrown by the explosion and impaled by a hook. However, when the Turtles look back, he is gone and has gray liquid on him, suggesting he is not human.

He then leads an assault on Saki's mansion. At that time, he has Baxter Stockman working by his side.

When the EPF is threatened of getting it's funding cut due to the attack at Oroku Saki's mansion and failure to capture Finn, Bishop faked an alien invasion in order to prove to the President, the one who plans on cutting his organizations funding, of how useful the organization is. His plan worked as the President agrees to give him money to fund the EPF.

However, it gets worst when the aliens that Bishop used for his false invasion had their mutagenic goo go into the sewers. This resulted in some animals and an New York citizen to be mutated. Because of this, he tries to warn Stockman to postpone his attempt to get a new human body. But his head scientist was too focused on creating his own body. But it proved to be a failure after a series of hallucinations and decomposition's. When Stockman is presumed dead in the river, Bishop picks his body up and resurrected him to fix the outbreak.

The Turtles (excluding Donatello who was infected) demanded they give a cure. Bishop agreed, having Stockman work with Leatherhead, while he had them retrieve the Heart of Tengu, which he heard from a mysterious contact that it was an archive of alien technologies. Once they got it to him, he had Area 51 self-destruct to cover its existence (though they all left before that) and had the cure spread all over New York. But when they use lasers to try to crack the Heart, it shattered, as the entity cut off communications. What Bishop didn't known was that the entity was the Water Foot Mystic, who was manipulating everyone so that Karai's control over them will be broken.

For season 5, Stockman recovered a number of nanobots from a Triceraton wreck at Coney Island, which they presumed to be a new alien technology, not knowing it is a government project. Stockman places a microchip on one of the nanobots, activating them to serve Bishop's commands. Unfortunately, they found out that the nanos were intelligent and that its original programming was fighting with Stockmans and gathered all advanced technologies as it escaped, underlining Stockman's overconfidence once more to Bishop. Later he joins forces with the Turtles and other heroes and villains in fighting against the Tengu Shredder.

When the Turtles travel to the year 2105, they are surprised to find Bishop is the president of the Pan Galactic Alliance essentially, the leader of the entire planet Earth, and the ambassador to other planets. It is revealed that this change in behavior toward aliens occurred when his lab caught on fire and he was pinned to the ground. One of the very aliens he hated with his every breath, that he had captured, and experimented upon, went out of his way to save John's life.

Bishop makes a cameo in the tales of the TMNT volume 2 in issue 61.

Bishop appears as a recurring antagonist in the IDW comics decipted as more zealous than his 2003 counterpart. 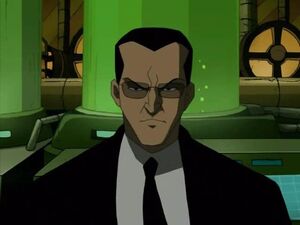 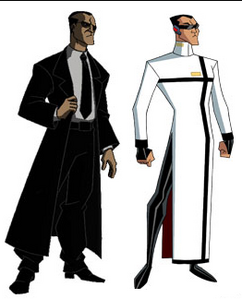