Head and Supreme Commander of Sector 7

Bringing security to the world

Redeemed Villain
Jack Burns is one of the two secondary antagonists (alongside Dropkick) of the 2018 science fiction film Bumblebee. He was the head of Sector 7 during the 1980s who plotted with the Decepticons to hunt down Bumblebee.

He was portrayed by the wrestler John Cena who also voiced Baron Draxum in Rise of the Teenage Mutant Ninja Turtles, Ferdinand in the titular film, and portrayed John Triton in The Marine, and Danny Fisher in 12 Rounds.

Burns was first seen doing a routine field competition with his fellow agents, with him emerging victorious. Shortly thereafter, he witnesses a meteor crashing down on where he stood, resulting in multiple injuries of Sector 7 agents. At first mistaking it for a friendly fire involving napalm bomb, Burs witnesses Bumblebee coming out of the meteor. Believing the Autobot to be a hostile invader, Burns orders his men to track down Bumblebee and manages to corner the Autobot. But Bumblebee and Sector 7 men are ambushed by the Decepticon Blitzwing, resulting all Sector 7 men being slaughtered save for Burns and Bumblebee, who forces himself into hiding after killing Blitzwing. As for Burns, he was left with a deep scar on his right cheek.

Taking refuge in a home owned by a teenager named Charlie Watson, Bumblebee's homing beacon was accidentally activated by Charlie, which incited two Decepticon spies Shatter and Dropkickto head over to Earth. Upon meeting the two Decepticons (who posed themselves as peacekeepers), Burns was told by them to find and hand over Bumblebee to them as soon as possible. Burns, who never trusted Decepticons to begin with, begrudgingly accepts their "advice". All the while, Burns continues vigorously to warn his superiors and Sector 7 scientist Doctor Powell that Shatter and Dropkick are not to be trusted, relenting only when hearing upon that if the US refuses to take the Decepticons as allies, they will simply go to other super powers such as USSR and China and offer their knowledge.

Burns was able to track down Bumblebee after the latter accidentally caused an energy spike around Charlie's neighborhood, and has him captured with aid of the two Decepticons before furiously silencing Charlie and her friend Memo from speaking of the event again. Despite having captured Bumblebee and turning him over to Shatter and Dropkick as agreed, Burns soon learned from Powell that his suspicion towards the Decepticon duo has been vindicated: Shatter and Dropkick were never peacekeepers and that they are planning to use Bumblebee to summon more Decepticons to Earth with their own beacon. Powell manages to warn Burns right before he was terminated by Dropkick.

Realizing the horrible truth, Burns orders his men to stop Shatter and Dropkick as well as Bumblebee at once, coming into direct conflict with Charlie. While Charlie attempts to free Bumblebee from captivity, Burns appears and manhandles her. When an angry Charlie tries to free herself by jabbing Burns in the chest, this resulted an angry Burns to shove Charlie in retaliation. However, Burns realized too late that this only infuriated Bumblebee to smack him before escaping with Charlie.

Burns and his men go after Bumblebee, but they got delayed by Charlie's family (who were out on driving looking for Charlie), obstructing their pursuit. Eventually, Burns arrives in a helicopter where the transmission tower is located in which Shatter and Dropkick are planning to use it as a beacon to contact Decepticons to Earth. While Bumblebee finishes off Dropkick, Shatter shoots down Burns' helicopter, though Burns is saved by Bumblebee, making him realize that Bumblebee is not the hostile alien as he thought to be. After Shatter is killed by a colliding cargo ship, Burns allows Bumblebee and Charlie to go free before the army arrives to detain them. He is last seen saluting to the yellow Autobot for saving his life.

Jack Burns was at first cruel, cunning and manipulative as he wanted to use the Decepticons for his own benefit and kill the Autobots at all costs. However, despite being a brutal person, Jack wanted to do all this to secure the world from hostile invaders as he misunderstood Bumblebee, as he did not realize that he would later save his life. 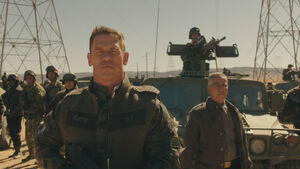 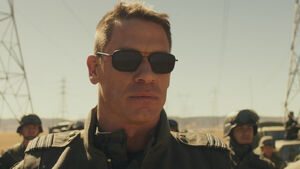 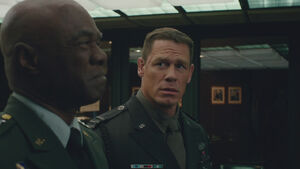