Save the Earth from evil threats.

James Darrell Edwards III, better known as Agent J or Jay, is one of the two main protagonists, alongside Agent K, in the Men in Black franchise and is the main protagonist of the Men in Black trilogy and in the animated series. He is an agent of the MiB, after being recruited by Agent K. He is energetic, and tries to bring life and emotion back to the bland organization.

He is played by Will Smith in the films who also played a fictional version of himself in The Fresh Prince of Bel-Air, Mike Lowrey in the Bad Boys movies, Robert Neville in I Am Legend, Steven Hiller in Independence Day, Oscar in Shark Tale, Lance Sterling in Spies in Disguise, Deadshot in Suicide Squad, Henry Brogan in Gemini Man, and Genie in the 2019 live-action remake of Aladdin.

In the animated series, J was voiced by Keith Diamond.

Unlike his partner, Agent K, J is an upbeat and wise-cracking Agent of the Men in Black. He is extremely dedicated to his job and was determined, so much that he ran down a Cephalopoid on foot (which is apparently very difficult to do). Compared to K, J is definitely the more playful and will even make jokes with his enemies as he did with Boris the Animal and was courageous enough to fight Edgar the Bug head on despite his massive size and capability to swallow him whole.

J is quite brainy at times, able to realize that if he murdered cockroaches he found on the floor it would get Edgar’s attention and used the time travel device to anticipate Boris the Animal's attacks and then dodge them. J is quite the poor liar, when meeting with the younger version of K and says his name he responds by saying he calls all males K and says he was with his girlfriend, Schtaron but replies by saying she's Greek. When neuralyzing people he normally gives very complex excuses and even at times will stray from the memory he was attempting to erase.

Originally he was an officer of the NYPD. During his time as an officer, he chases down an extremely fast alien, disguised as a human. When he finally catches up, it gives James a warning, before jumping off a building. Once at the station, he is interrogated and suddenly, a man in a black suit walks in and tells Edwards that it was an alien.

Once Edwards says all of what he knows, he is neuralyzed and given a card that says MIB and has an address on the back. He goes to the building, and goes through a training program for recruits. He fails terribly, but Agent K (the black suited man) tells Zed that he is the new member, not the others.

Edwards is reluctant to join, at first not even believing anything, but after seeing the Worms, a strange race of aliens, he becomes to understand their purpose. The next day he returns, and becomes Agent J, the newest Men in Black recruit.

Partnering up with K 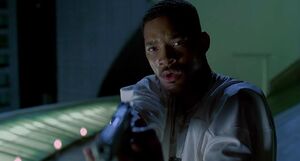 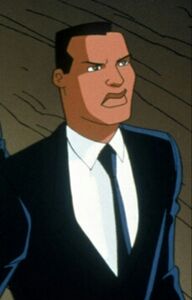 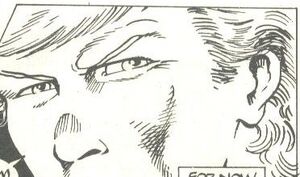 J in the original Men In Black comic series.