Protecting the Earth from alien scum

Agent K, a.k.a. Kevin Brown, is one of the two main protagonists, alongside Agent J, in the Men in Black franchise and is the deuteragonist of the Men in Black trilogy and in the animated series. He is portrayed by Tommy Lee Jones, who also played Ed Tom Bell in No Country For Old Men and Chester Philips in Captain America: The First Avenger. In Men in Black III, his younger self is played by Josh Brolin, who also played Jonah Hex in the 2010 film Jonah Hex and Cable in Deadpool 2.

Originally Kevin Brown, he helped found MiB back in the 50's. It was not until March 2, 1961, that contact was made outside New York City. After this, Kay became fully devoted to his work.

Kay was originally made partner with an agent named Alpha. However, Alpha stole a Cosmic Integrator, and went rogue, combining his body with alien pieces. At some point, he was made partner with another founder, Dee. During the 60's, his future partner, Agent J, came to the past, and the duo would team up to defeat Boris, so Kay would live and Earth would be saved. At an unknown date (sometime in the 70's or 80's), Kay and other agents protected Princess Lauranna of Zartha, and was entrusted with the Light of Zartha to stop it from getting into Serleena's hands. However, Kay pretends to launch the Light into space. Serleena kills Lauranna and follows, and the Light is later revealed to be Lauranna's (and implied to be Kay's) daughter, Laura Vasquez.

In the first film, after having to kill an alien, Mikey, his partner finally wants to retire. Wanting so, Kay neuralyzes Agent D. In need of a new partner he recruits an NYPD officer, now named Agent J. Together, the duo must track down Edgar the Bug, a Bug that wants the energy of the Arquilian Galaxy. In the end, Kay "retires", and Jay becomes agent to Elle. It is explained that he was in coma for all of those years, and returned to his wife.

In the animated series, Kay was not neuralyzed and is still an agent to the MiB. He is still partner to Jay, and Elle still works for the MiB. During the series, he and Jay must constantly fight off aliens, and even his old partner Alpha.

In the second film, Jay must find the neuralyzed Kay to stop Serleena. Jay finds him as a Postal Worker in Massachusetts. Here, Jay must de-neuralyze Kay, so they can stop Serleena from destroying Zartha and Earth.

In the third film, Jay must go back in time to stop the villain, Boris from killing a young Kay to destroy the Earth. 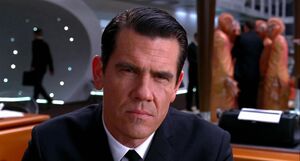 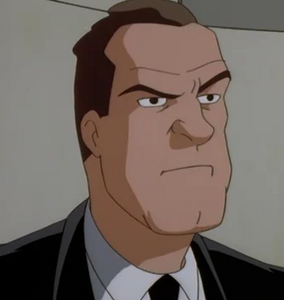 Agent K in Men In Black: The Series. 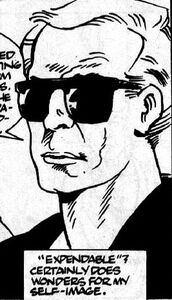 K in the original comic. 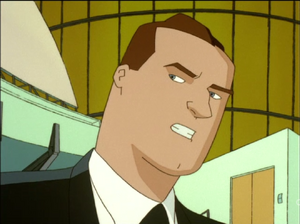 Kay in Seasons 2-4 of the animated series.