Plotting against Cronos
Manipulating his allies

Overthrow Cronos and rule the world himself

All Cronos members and affiliates

Agito Makishima is one of the major protagonists of the manga/anime series, Guyver: Bioboosted Armor. He is the host of the third lost Guyver Unit and was responsible for arranging the units to be stolen from Cronos. Though he despises Cronos, Agito recognises that the power they wield could be greatly beneficial to humanity, and so he intends to overthrow the organisation and take control of the world using their resources. To that end, he has been aiding Sho Fukamachi - Guyver-I - in fighting Cronos, subtly manipulating him whilst keeping his own goals to himself.

Youth and discovery of the Guyver

Agito Makishima was heir to his father's company until it was bankrupted by Max Pharmaceuticals, managed by his uncle Genzo Makishima. Genzo murdered Agito's parents and adopted him, but showed no familial care for him, only keeping him as an employee. When Max was bought by Cronos, Agito was brought into the fold and trained as a future candidate for organisation management. He became privy to many of Cronos' secrets and assisted Genzo with managing the Japanese branch, overseeing many research projects and Zoanoid optimization procedures. All the while, however, Agito plotted revenge against Genzo and sought to usurp Cronos' power.

When Cronos Japan received the G-Units recovered from Relic's Point, Agito arranged to have them stolen. The theft of the units did not go according to plan and they were scattered in the Lake Narisawa area. One unit was discovered and activated by Sho Fukamachi who happened to be in the area, and a second unit was recovered by the Cronos troops sent to retrieve them. Agito managed to find the third unit himself, activating it and keeping it hidden from his staff at Cronos Japan.

When Cronos became aware of Sho Fukamachi possessing a Guyver unit, they launched multiple operations to capture him. Agito interfered with several of these attempts, aiding Sho from the shadows but keeping his identity secret from both Sho and Cronos. However, when Sho was attacked by Agito's adoptive father Genzo - who had been turned into the Zoanoid Enzyme - Agito allowed Sho to die, convinced that allowing Cronos to take the control medal for study would be a fatal error on their part. His theory proved correct as the control medal was able to regenerate Sho's entire body from just minute remnants of flesh and blood on its fibers. Agito made sure that Cronos did not interrupt Guyver-I's rebirth by bio-boosting within the Japan branch and set about destroying the facility from within, aided by Guyver-I once he had been fully regenerated.

When Sho and Agito destroyed the Cronos Japan branch, Agito made a grave error by referring to himself as "Zeus" to Richard Guyot, who understood the reference and was able to determine the identity of Guyver-III. Although Guyot appeared to perish during the destruction of the Japan branch, he survived and resurfaced just a day later, playing the fool temporarily in order to lure both Agito and Sho into a trap at Relic's Point, Cronos' headquarters and last remaining Japanese base.

Later on, when Mizuki and Tetsuro Segawa were abducted by Cronos agents, Agito revealed his identity as Guyver-III to them and freed them, only to be forced into battle against Cronos' elite group of combatants, the Hyper-Zoanoid Team Five. It was then that Guyot revealed he knew Guyver-III's identity and shared that knowledge with the manager of Relic's Point, Dr. Hamilcar Barcas. With his identity revealed, Agito could no longer disrupt Cronos from within and was forced into hiding along with Sho and his friends.

The Fall of Relic's Point

At a later time, after the Guyvers and their group barely managed to escape certain death at the hands of Guyot, Agito was able to arrange a union with a group of rebellious Cronos scientists working in the lowest levels of Relic's Point. Dr. Odagiri and his team allowed Agito, Sho and their friends to take shelter in the basement level of the facility and requested the aid of the Guyvers in bringing down Cronos from within. In order to accomplish this goal, Odagiri's team were intent on opening the alien spacecraft buried deep beneath Mt. Minakami, but they would need the Guyvers to do it.

Sho and Agito entered the Creator ship and Sho was able to take control of it, but Guyot attacked the group using a Unit Remover, a device designed to forcefully sever a Guyver unit from its host. Thanks to Agito and Masaki Murakami, Guyot failed to acquire a G-Unit, but Murakami was killed in the fight. When the ship emerged from Mt. Minakami, Relic's Point was destroyed but Sho and his friends were safe inside the ship. Agito and Sho then fought against Guyot together, but the treacherous Zoalord was instead killed by Archanfel, Cronos' supreme leader. Archanfel and the other Zoalords then used their power to destroy the Creator ship and supposedly the Guyvers and their friends with it. However, Sho willed the ship to send his friends away to safety while he and Agito were apparently destroyed along with the ship.

Agito survived the destruction of the Creator ship and awoke inside some kind of coccoon. The injuries he had received from Archanfel were healing and he emerged from the coccoon to find himself far away from Relic's Point, far from Japan, even. He found that inside the coccoon was another strange object: a chrysalis of sorts. Agito sensed that Sho was inside it, but was unconscious and undergoing some kind of metamorphosis. Cronos aircraft were approaching so Agito had no choice but to leave the chrysalis behind and go into hiding.

Agito later learned that he was in Canada and that Cronos had taken over the planet. With the world now aware of Cronos and the Zoanoids, Agito began planning a resistance movement against Cronos' new world order. He created a "terrorist" group that he referred to as "Zeus' Thunderbolts" and rallied everyone he could to fight against Cronos. The movement grew quickly and launched many surgical strikes against government bureaus and Zoanoid processing centers. However, the movement relied heavily on Agito's involvement as the Guyver since Zoanoids were mostly immune to standard weapons.

Agito would return to Japan a year after X-Day, following the chrysalis, which had mysteriously vanished under its own power from Cronos' Dead Sea facility. When Sho emerged from the chrysalis as the Guyver Gigantic, he and Agito once again joined forces to put an end to Cronos' rule. However, this alliance would not last; Agito continued to pursue his own agenda, intent on overthrowing Cronos and seizing power himself. He was greatly impressed with the Guyver Gigantic, but felt that it's power was wasted in Sho's hands and sought to control it himself. Since the Gigantic had been forged by Sho's own willpower, Agito theorised that a stronger will could wrest control of the Gigantic even when another Guyver was using it.Agito's theory proved correct and he was able to equip the Gigantic himself through sheer will, although this resulted in Sho losing its power during a critical battle with the Zoalord Friederich von Purgstall.

For a time, Agito fought against Cronos using the Gigantic armour, known as Gigantic Dark while under his use. However, turnabout is fair play: Sho Fukamachi had originally forged the Gigantic armour with his own will and, like Agito had done, was able to summon the Gigantic while Agito was using it in battle against the Zoalords Li Yentsui and Waferdanos. This time, Sho would not allow Agito to use the Gigantic for his own selfish ambitions and would regain control of the armour permanently, causing Agito to seek out a means of creating a Gigantic himself. But to do so, he would need vital control mechanisms from a Creator ship, and the only one known to remain on Earth was located beneath Cronos Headquarters in Arizona.

Agito Makishima is level-headed and cool. He distances himself emotionally from others, seeing his allies as mere pawns in his plans to bring down Cronos. His only confidants are Yohei Onuma and his granddaughter Shizu, who are aware of Agito's plans and continue to stand by him and serve him no matter what. Agito's desire for personal power likely stems from a sense of helplessness earlier in his life. As a child, his father's company was bankrupted and his parents were murdered by his uncle Genzo, and Agito had been unable to do anything about it. As well as desiring revenge against Genzo and Cronos, Agito wants to ensure that he will never again be powerless.

By bonding with the Guyver, Agito has gained extraordinary powers that he uses to battle Cronos. The bio-boosted armor was created by the alien Advents (aka Creators or Uranus) as a standard-issue armament, but its destructive potential is increased many times when equipped by a human being. 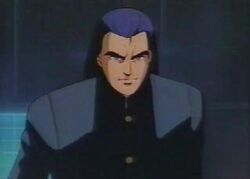