Member of the Roman Orthodox Church, Founder and Leader of Agnese Forces, Member of Necessarius

Lotus Wand, Divine Protection of Ægidius, Manipulation of her subordinates' thoughts, Telepathy, Can teleport her messages from her notebook to others, Can manipulate the thoughts and actions of her followers to her own will

Eliminate the enemies of the Roman Orthodox Church, Find and kidnap Orsola Aquinas (failed), Help her friends escape from the Queen of the Adriatic Sea (succeeded), Serve Necessarius, Serve the Roman Church, Protect Lucia and Anglene from harm

Former Antagonist / Misguided Hero / Priestess
Agnese Sanctis is a character from the light novel, manga, and anime series A Certain Magical Index. She's a member of the Roman Orthodox Church and is the leader of her own personal forces, the Agnese Forces, and is the former main antagonist of the Orsola Aquinas Rescue Arc where she tries to kidnap Orsola Aquinas on charges of heresy for defecting from the Catholic Church for trying to decode the infamous Book of the Law and was eventually defeated. Eventually, Agnese is saved by both Touma Kamijou and Orsola and eventually redeems herself where she ends up joining Necessarius and acts as the representative of the Catholic faith to England and the English Puritan Church.

She is voiced by Rie Kugimiya in the Japanese version of the anime and Alex Moore in the English version.

Agnese is about one/two years younger than Index is but is still around the same height as her. She appears to be very slender as her waist is even slimmer than that of Index who is rather slim herself. She has dark reddish hair that is tied in many pencil-thinned braids that make deadlocks and has dark reddish eyes as well. She wears a traditional Roman Catholic nun uniform with sleeves that are long enough to cover her hands but has a much shorter lower half with her thighs being exposed. She also wears a pair of chompine platform shoes because of beauty and wears the Roman Catholic cross on her neck.

Agnese has many layers and forms of her overall personality in general depending on the conditions she's in. When she's off duty, Agnese acts like many girls her own age, being rather clumsy, dimwitted, and very childish as well. She gets embarrassed when caught lewd and is also afraid of slugs. Like many on the Magic Side, she's rather unfamiliar and impaired by modern technology which she's not used to seeing such as when she stuffed an entire futon into a washing machine and it flooded. Agnese also doesn't like the idea of having to speak to a foreigner in a foreign language as was shown with her dysfunctional Japanese and she also has the tenancy of sleeping in her underwear and sleepwalks as well.

As the leader of the Agnese Forces, she is a powerful and relentless leader and is devoured follower of the Roman Orthodox Church. She blindly follows the orders of the Roman Church and was able to lie and manipulate Touma into having her capture Orsola Aquinas and putting her through a mock Trial of Sin. Agnese hates magicians yet she is one herself and she justifies the use of Magic and Magicians as member of the Roman orthodox Church because it's been part of the church's history and also refers to all Non-Catholics (such as Protestants/Anglicans) as animals.

After her defeat by Touma, she ends up becoming more level headed and she ends up redeeming herself and joins Necessarius along with her subordinates where she becomes a representative of Roman Catholicism in the United Kingdom. She also appears to be very concerned for Lucia and Angelene whom she showed signs of worry while being captured and imprisoned by Biagio Busoni.

As the leader of her own military unit, Agnese Sanctis is a powerful warrior and a decent magician. She can bend her subordinates to her own will and acts as one of the enforcers of the Roman Orthodox Church to cement their dominance over much of the world and the magic side. She won't hesitate to use force and is often proud of it sometimes. 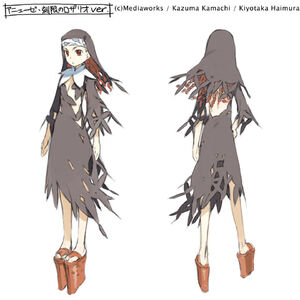 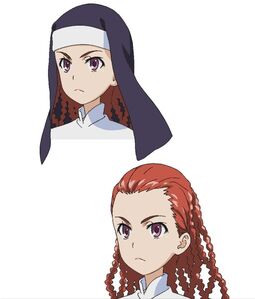 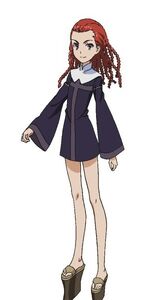 Agnese with her hair shown 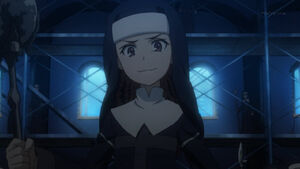 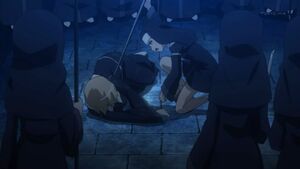 Agnese torturing Orsola during the Trial of Sin 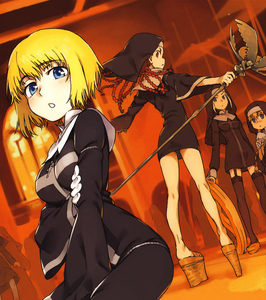 Agnese with Angelene and Lucia behind a captured Orsola 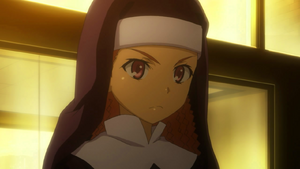 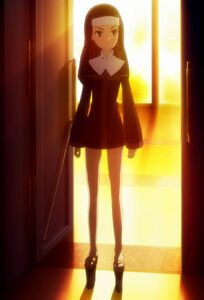