Father/Daddy (by his sons)
Great-Grandfather

To rule the Pride Lands

Ahadi's backstory is unknown, though what can be said is that he was born to either Mohatu and his wife or unknown lion and lioness some years before the events of "A Tale of Two Brothers". At some point in his adulthood and kingship, Ahadi married a lioness named Uru and had two sons with her named Mufasa and Taka.

Ahadi favoured Mufasa and choose him to be his heir, much to the dismay of Taka, who came to resent his father and brother.

Years later, Ahadi along with his adolescent sons come to the aid of a mandrill named Rafiki who was about to be attacked by a trio of young hyenas named Shenzi, Banzai and Ed. Ahadi has the hyenas leave Rafiki and sends them away.

After hearing that Rafiki is in the Pride Lands to gain knowledge of it's healing plants and their properties, Ahadi invites him back to Pride Rock to share some of his wisdom as help is desperately needed, due to a drought striking the kingdom. After the two talk for hours, Ahadi offers Rafiki to stay the night in Pride Rock.

The next day, a crowd of the Pride Lands animals come to Ahadi wanting to know how he will fix the problems facing the kingdom (including hyenas causing trouble, as brought up by a hornbill named Zuzu), which Ahadi says he will fix the problem. Taka reminds Ahadi that he had promised to take him and Mufasa hunting, which Ahadi has to postpone it due to what is happening, much to Taka's anger, who accuses his father of favouring Mufasa. The animals manage to stop the argument by telling the royals to stop arguing about the throne and instead focus on the problems at hand. Ahadi promises to deal with the hyenas, but says that there is nothing he can do about the drought until Uru comes back from looking for a new water source. Ahadi attempts to apologise to Taka for breaking his promise, but the younger lion is too angry to forgive him.

Later, Ahadi is informed by Zuzu that Mufasa and Taka are being attacked by a cape buffalo named Boma and his herd. He goes to his sons' aid with a group of animals. After the animals surround the herd, Ahadi demands an explanation from the buffaloes, who blame Mufasa and Taka for what happened. Just then, Mufasa tells Ahadi that Taka is hurt. Whilst Rafiki tends to Taka, Ahadi warns the buffaloes that the injury better not be serious.

Afterwards, Ahadi, Mufasa, Rafiki and Zuzu discuss the problems of the kingdom, before coming to a conclusion that the King needs a majordomo to assist him in the matters of the kingdom, to which Ahadi gives the job to Zuzu (whose son Zazu would inherit the title during Mufasa's reign) and also makes Rafiki his adviser. The King then proclaims that he can feel a great era beginning for all of the Pride Lands. Some point after this, Uru returns to the Pride Lands having found a new water source, thus solving the drought.

Some years later, Ahadi passes away from either old age or illness and was succeeded by Mufasa as King.

Illustrations of Ahadi depict him as having a great resemblance to his eldest son Mufasa, though with slightly darker gold fur.

However, the story incorrectly describes Ahadi as having a black mane and green eyes like that of his younger son Scar. 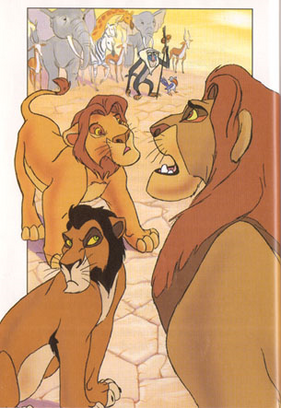 Ahadi with his sons, Rafiki and Zuzu 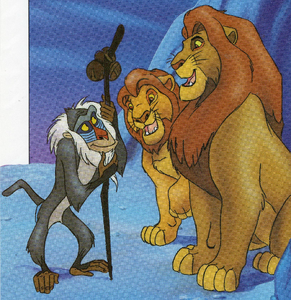 Ahadi with Mufasa and Rafiki
Add a photo to this gallery

Retrieved from "https://hero.fandom.com/wiki/Ahadi?oldid=1712963"
Community content is available under CC-BY-SA unless otherwise noted.