Hangout with his friends

Ahkmenrah is a major character in Night at the Museum film series. He is an ancient Egyptian Pharaoh who, with his tablet, came to the Museum of Natural History in 1952. He is one of Larry Daley's friends and helps him out in need.

He is portrayed by Rami Malek, who also played Chee-Chee in Dolittle.

Ahkmenrah is the second born son of Merenkahre and Shepseheret, and the younger brother of Kahmunrah. More specifically, he is thought to be the 4th Pharaoh of Egypt, based on a statement from his older brother, in Night at the Museum: Battle of the Smithsonian .Ahkmenrah was gifted by Tablet from his parents, that they wouldn't let the inevitability of death separate them. Ahkmenrah was favored by his parents, though this could not be said for Kahmunrah. As the first born child, Kahmunrah was to inherit the throne. However, due to his brash, violent, and irresponsible nature, their parents gifted Ahkmenrah the throne, thereby skipping Kahmunrah in the line of succession.

In contrast to their parents, Kahmunrah loathes Ahkmenrah, carrying on about how he was clearly the "favorite son." He holds a grudge against Ahkmenrah for the special treatment he received from their parents, saying that they "always gave him the best of everything." As the film's antagonist, he aims to steal Ahkmenrah's tablet for himself. In doing this, he will be able to summon an immortal army from the underworld, so that he may resume his reign and expand his territory to claim the rest of the world.  In the original script for Battle of the Smithsonian, it is revealed that Kahmunrah murdered Ahkmenrah to assume the throne. Although this is not actually mentioned in the film, the audience could very well assume that he had something to do with his younger brother's death.

In the original script of 'Secret of the Tomb', Merenkahre states that "it was the darkest and hardest day of my life when I lost you, you were butchered. I'll never forget your mother running in and screaming your name, she couldn't believe that you were gone." Then Shepseheret adds "A parents grief is one of the worst, especially when my young gorgeous boy had been slashed into pieces."

Ahkmenrah's tomb was excavated during the Ahkmenrah Expedition of 1938. His sarcophagus, along with his 24-carat gold tablet, were brought to the Egyptology Department of Cambridge University to be displayed. During his time on display, he learned British English, presumably from hearing the students and staff conversing. It could also be assumed that he spent many of these nights outside of his sarcophagus, as he never mentions being trapped while at the university.

After leaving Cambridge in 1952, it was arranged for Ahkmenrah to become a permanent exhibit of the Museum of Natural History] in New York City. His sarcophagus rests in the middle of the exhibit, walls of hieroglyphics surrounding it. On the back wall behind the sarcophagus rests the tablet, which glows and activates during the beginning of each night. The entrance is guarded by two Anubis statues, both twenty feet tall. These statues were also excavated from his tomb. Just outside of the exhibit are display cases, filled with other Egyptian artifacts.

Night At The Museum

Ahkmenrah's tomb is first seen during daylight as Cecil the previous night guard shows Larry. Larry is then showed the 24 kart gold tablet behind Ahkmenrah that Cecil says is Ahkmenrahs "Most prized possession" and that it was "Worth a fortune". Later when Larry is confused on how everything in the museum is coming to life Theodore Roosevelt shows him the tablet in Ahkmenrah's tomb and explains that it is what brings them all to life. While he does this you can hear Ahkmenrah wailing from inside his sarcophagus and Theodore tells him "Yell all you want Pharaoh, you been in there for 54 years, you're not getting out tonight!" It is thought that the previous night guards told all the free-roaming exhibits not to let Ahkmenrah out with no explanation as to why. That is what lead the other exhibits to fear Ahkmenrah.  The next time Larry is at Ahkmenrah's tomb is when he and his son are locked in the tomb by the previous night guards as they steal artifacts. The Anubis, Ahkmenrah's protectors start to attack Larry and his son, Nick.  To save their lives Larry slides the stone holding Ahkmenrah in his tomb off and lets the pharaoh out. At first, as Ahkmenrah gets up from his tomb he seems scary with the rags covering his face, however, upon removing the wrappings from his head, Ahkmenrah states " You would not believe how stuffy it is in there" in a British accent, which of course confuses Larry and Nick. Ahkmenrah then explains he was on display at the Egyptology Department at Cambridge University and learned English there. From that point on Larry can tell Ahkmenrah isn't dangerous and has Ahkmenrah help them out of his tomb. later Ahkmenrah translates Hun so that Larry won't be ripped apart by Huns and uses his tablet to summon all the exhibit's back to the museum before dawn so they won't turn to dust. He helps Larry tally up all the animals and exhibits.  Then there's a huge dance party the next night where you can see Ahkmenrah playing soccer and dancing.

Battle of the Smithsonian

He makes a brief appearance at the start but has a bigger part at the end where he is giving a lecture on the Tablet to visitors of the Museum. During the film, it is revealed that he had an older brother named Kahmunrah. It's also revealed that his parents favored him more than his older brother, to which Kahmunrah told Larry Daley that their parents gave Ahkmenrah "the best of everything", including the throne, which Kahmunrah was supposed to inherit first. After Ahkmenrah's death, caused by his jealous brother, Kahmunrah ascended to the throne. It can be assumed that his reign had not lasted long due to his sadistic nature.

Secret of the Tomb

Ahkmenrah and the rest of the Museum residents start acting strangely due to the Tablet losing its magic. The symptoms include freezing back to wax, normally peaceful characters becoming violent, Teddy losing his memory and babbling unintelligibly and Ahkmenrah becoming ill. Ahkmenrah is affected more than anyone else because it is his tablet and is later revealed by his father that the tablet was made with Khonsu's magic to keep the royal family together, even after death, which is why the tablet brings the museum to life. Larry, his son Nick, and a few of the favourites of the NYC gang travel to London, England and to the British Museum to find Ahkmenrah's parents, who know the secrets of the tablet and possibly what is wrong with it. During the film, the young pharaoh steadily gets worse with every tablet flare-up and toward the end he almost reverts back to his dead, full-mummy form where he rapidly begins to rot and turn into 'zombie like' state again.

At the end of the film, it is decided that Ahkmenrah should remain in the British Museum, with his parents.

He is characterized as a kind-hearted individual, and is implied to be a fair and just ruler. It is officially unknown why the previous night guards kept him locked in his tomb, or why they told the other free-roaming exhibits not to let the young pharaoh out during the night. But in the novelization of Night at the Museum, Ahkmenrah has his own curse that he developed after his discovery of what his brother did to him when he was alive. From then on, it has been told Ahkmenrah became kind of bitter and hateful so that if anyone annoyed or triggered him, he would set a curse on you to make your eyes bleed and have cockroaches flooding from your mouth as you become brittle and begin to crumble from the inside out. Along with the hate on his brother and a bit on life, he also became more caring about those around him, not wanting the same fate on them.

Ahkmenrah wasn't an actual pharaoh in Egyptian History. It is confirmed that the basis of Ahkmenrah was taken from King Tutankhamun, the Boy King, another teenaged pharaoh who ruled and died young. However unlike Ahkmenrah, Tutankhamun's death was unexplained. 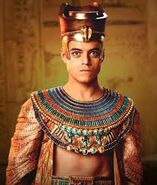 Ahkmenrah on the Pure Good Wiki