Ahsoka Tano, nicknamed Snips by her master, was a Togruta Jedi Padawan during the Clone Wars, the conflict between the Galactic Republic, the dominant galactic government of the time, and the Confederacy of Independent Systems, the faction of planetary and sectorial governments seeking to leave it. Tano was assigned to Jedi Knight Anakin Skywalker by Jedi Grand Master Yoda, and showed an eagerness to prove herself worthy to be his apprentice. Tano was involved in the defeat of the Separatist army on the planet Christophsis, and was important to Republic efforts during the Battle of Teth. Along with Skywalker, Tano was instrumental in acquiring the Republic's safe passage through Hutt Space, due to her part in rescuing the son of Jabba the Hutt, which ensured an alliance between the Republic and the Hutts.

Along with her Master, Tano proved a key figure during the events surrounding the Separatist superweapon, the Malevolence, a ship capable of destroying entire Republic fleets with its dreaded ion cannons. Partially due to her involvement in the crisis, the Republic was able to destroy the superweapon, removing yet another advantage possessed by the Confederacy. Later, Tano would duel the feared General Grievous himself, becoming one of the few Jedi to survive such an encounter with the cyborg.

Along with Mirialan Jedi Master Luminara Unduli, Tano was involved in the failed Republic effort to foil a mission mounted by Dark Acolyte Asajj Ventress to rescue Viceroy Nute Gunray and engaged the Dark Jedi in an extended duel. Later, she was a key figure in the rescue of Jedi Master Aayla Secura during the Sky Battle of Quell, and later participated in the defense of the planet Maridun, where Separatist General Lok Durd attempted to use an experimental weapon on the planet's inhabitants. Notably, Tano helped to ensure that the deadly Blue Shadow Virus was not released into key Republic systems by the Separatists, and also fought in the Battle of Ryloth, helping to eliminate the Separatist blockade surrounding the planet and allow invasion forces to land, during which she led a squadron for the first time.

Ahsoka Tano is Anakin Skywalker's Padawan, she is a Togruta. She was found by Plo Koon, while he was on a mission. Ahsoka has been on many missions, with her Master, like when they both had to rescue Jabba's son, Rotta, nicknamed "Stinky" by Ahsoka.

After her friend Barriss Offee betrayed her and framed her for things she did not do such as bombing the Jedi Temple and killing someone she was arrested by her own clone troopers and was about to be found guilty but Barriss told the court that she was behind the attack and even though she was welcomed back to the Jedi Order she choose to leave due to she cannot learn to trust herself. 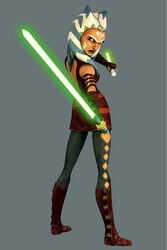 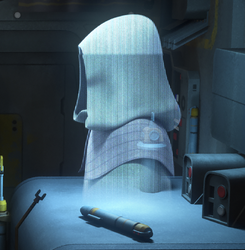 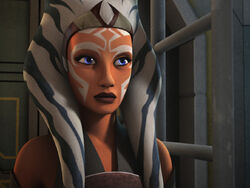 Ahsoka Tano in Star Wars Rebels
Add a photo to this gallery
Retrieved from "https://hero.fandom.com/wiki/Ahsoka_Tano?oldid=516157"
Community content is available under CC-BY-SA unless otherwise noted.