Power of the Magical Spell is Ei-ei-Poo

Rolling in his ball

To save MeeMee from Dr. Bad-Boon

He is an adventurous monkey who lvoes bananas, he is willing to go on adventures to collect them. He is friends with GonGon, who he previously had a rivarly with, but soon became best friends with him.

AiAi is a brown monkey who wears a T-Shirt that has the letter A on it, he also wears a backpack starting with Super Monkey Ball: Banana Blitz. 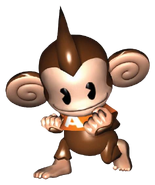