Escape and be free (succeeded, but later returned to Yusaku after his world collapsed)
Stop Lightning from enslaving humanity (succeeded)
End humanity to avenge his fellow Ignis (failed)

Supporter
Ignis (イグニス, Igunisu), also known as the Mysterious Lifeform (謎の生命体, Nazo no Seimeitai) or the Mysterious A.I. is the deuteragonist appearing in the Yu-Gi-Oh! VRAINS anime. Ai is an Ignis created from 10 years lost incident incarnates from Yusaku Fujiki. It is a mysterious AI program sought after by both SOL Technologyand the Knights of Hanoi. He was captured into Yusaku Fujiki's Duel Disk and forced to be his Duel AI until Yusaku released to return back to his world. However, after Cyberse World is destroyed, Ignis returned Yusaku.

Ignis is a self-centered AI who gets carried away easily and likes to joke around. Right from the start, he can be seen as mischievous and arrogant. According to his own words, he is very disliked by his own kind. According to Flame, he is an airhead.

As an AI belonging to the Cyberse, Ignis has some degree of control over it. He is the only one who knows its location and can unlock data from it to start a Data Storm. Ignis is shown to be far more sophisticated than other AIs, being fully capable of thinking and acting on his own will and showing emotion. According to Shoichi Kusanagi, Ignis is built out of highly complicated algorithms that even Yusaku couldn't fully decode.

After being trapped in Yusaku's Duel Disk, he can also act as a Duel AI. Inside Link VRAINS, Ignis is shown to be able to transform into a monster, which he did to devour a Knight of Hanoi member. After bite of Revolver's arm, he regained his original form.

An AI program created by SOL Technology, Ignis was used alongside five other AI programs. Five years prior to the start of the series,Knights of Hanoilaunched an attack against the Cyberse and captured the AIs protecting it, except for Ignis who wasn't present. Ignis arrived, noting that it was a good time to be hated by his own kind. He stole vital information from the Cyberse and hid it within himself, disconnecting it from the rest of the network which forced Hanoi to stop the attack. Despite being crushed by a "Cracking Dragon", his eye survived. Ever since, he had been running from both the Knights and SOL Technology.[1] Being reduced to nothing but an eye also damaged most of his memories.

While being pursued by both factions, Ignis fell into a trap created byPlaymaker, who saved him by absorbing him into his Duel Disk, turning him into a Dueling AI, thus necessitating the defeat of Playmaker in order to recover Ignis. Ignis doubted that Playmaker's Deck was strong enough to defeat the Knights' "Cracking Dragon" before stirring up a virtual wind called "Data Storm" that initiated a Speed Duel.

Before the Duel began, Ignis explained Playmaker how Speed Duels worked but didn't mention Skills. Through out the Duel Ignis repeatedly tried to offer support for Playmaker, only for Playmaker to keep telling him to shut up and remind that he was holding Ignis hostage. When they sucked into a tornado within the Data Storm, Playmaker figured out that Ignis not mentioning skills and bringing him into the tornado were part of his calculations. Ignis confirmed this, and activated Playmaker's skill "Storm Access", which allowed them to obtain "Decode Talker" so that Playmaker could defeat the Knight.

The Knight attempted to self destruct and kill Playmaker, but Ignis turned into a monster and devoured the knight to save Playmaker. He suggested Playmaker should log off soon. Yusaku and Shoichi Kusanagi spent the next few days trying to figure out Ignis' programming and nicknamed him "Ai", a pun on "A.I." and "eye". Eventually Yusaku found footage from some of Ignis' memories, which Ignis himself didn't understand except for Revolver being the leader of Hanoi. Scanning those recordings caused Revolver to sense Ignis and try to find him, but Shoichi shutting off Café Nagi's power prevented Revolver from finding them. The next day, Ignis was left at Yusaku's house, there he tried to convince Roboppy to set him free. 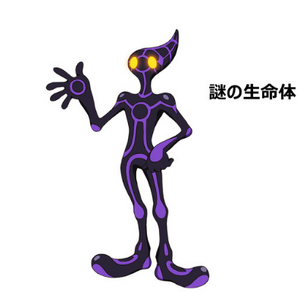 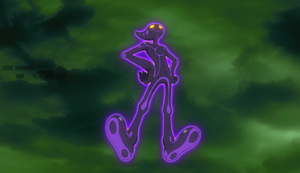 Ai proclaiming himself as a savior. 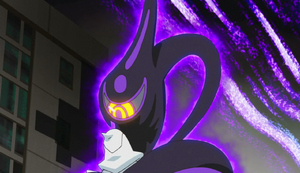 Ai about to devour a Knight of Hanoi. 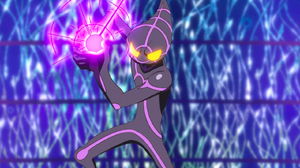 Ai getting ready to fire. 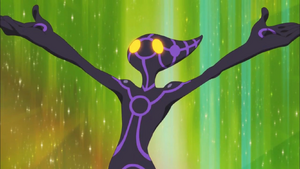 Ai gets his body back. 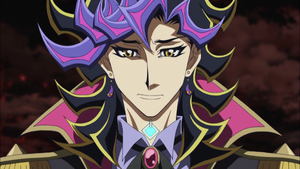