Aiho, The woman who uses comedy-like methods to solve problems that could end up as a tragedy

Teaching, Hanging out with her friends, Drinking beet, Smoking

Protect and defend Academy City from internal and external threats

Military Leader, Counter-Terrorist, Kind-Hearted Heroine, Drinker
Aiho Yomikawa (黄泉川 愛穂 Yomikawa Aiho) is a recurring character of the A Certain Magical Index series. She is a lieutenant of Anti-Skill and is an operative of its Branch 73 Division. Aiho also serves as a P.E. Teacher for A Certain High School and is friends with her fellow co-worker Komoe Tsukuyomi and junior Tsuzuri Tessou where she hangs out with them everytime she's off duty.

She is voiced by Yūko Kaida in the Japanese version, and by Martha Harms in the English version.

Aiho is a tall woman with many glamorous features on her. She wears a light green jersey and pants when teaching P.E. and her jeresy is very tight around her breasts. On duty, she has a dark blue shirt and pants with a blue jacket over her shirt and whenever she enters into combat, she has the standard issue Anti-Skill SWAT Combat Armor on her and carries around her SG-550 Assault Rifle and occasionally a riot shield. She has gray eyes and dark blue hair with a ponytail making her look careless but also giving off an intriguing sexy feeling.

Aiho is a very kind and gentle individual who is very nice with people in general and is especially great with children. She cares for children (most likely for the majority child population of Academy City) and is even willing to say that she'll never turn her weapon on a child no matter what as it is her moral code. Her kindness mainly extends to her personal life as on duty, it's contained. Aiho takes her job very seriously as she will berate Tsuzuri if she is caught messing up while on patrol and often makes kids do intense workout exercises without hesitating. Aiho is well known for using protective gear and using it to take down rogue espers and joking how since those are used for protection, she can use them the way she does labeling her 'the woman who uses comedy-like methods to solve problems that could end as a tragedy'.

Whenever she's off duty, Aiho is very carefee and cheerful. She often goes out with her friends to eatouts, public baths, and enjoying beet together to the point of passing out in public and tends to tease Komoe as if she were a child (most likely because of her child-like appearance). She also has no shame in showing her naked body to teenagers either since they are children. This is shown when Accelerator walks in on Aiho, Last Order , and Kikyou Yoshikawa all showinger and Kikyou and Aiho were acting casual at the sight og Accelerator seeing their naked bodies while Last Order was overwhelmingly embarresed. She appears to have an obsession with cleanliness as she will go on a cleaning spree when triggered to do so and will often lose her keyes in the process. 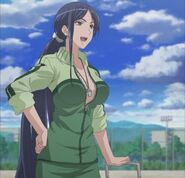 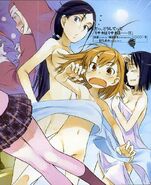 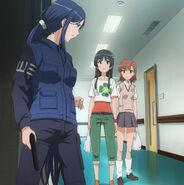 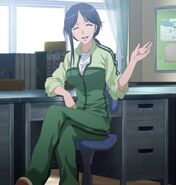 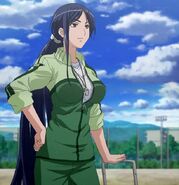 Add a photo to this gallery
Retrieved from "https://hero.fandom.com/wiki/Aiho_Yomikawa?oldid=2171828"
Community content is available under CC-BY-SA unless otherwise noted.