Aikurō Mikisugi (美木杉 愛九郎 Mikisugi Aikurō) is one of the main characters of Kill la Kill. He is Ryūko Matoi and Mako Mankanshoku's enigmatic homeroom teacher. Initially appearing dull and easily flustered, he secretly observes and aids Ryūko by leading her to Senketsu. It is later revealed he is working undercover at the school as a spy for the Nudist Beachrebel group.

He is voiced in Japanese by Shin'ichirō Miki and in English by Matthew Mercer, the later of whom also voiced Chrom, Shigure, Ryoma, Jotaro Kujo and Yusuke Kitagawa.

In his disguise, Aikurō looks like a middle-aged man with blue messy hair, with a bent back and an unsteady gait. His blue eyes are hidden behind large reflective glasses. When in his true persona, Aikurō removes the glasses and sweeps back his hair, revealing that he is actually a young and very handsome man. In both personas, he wears a white long-sleeved shirt with a black tie and black jeans, though in his true persona, the shirt is worn much more loosely as Aikurō has a tendency to strip his shirt off and show off his body like a posing supermodel. In this modeling mode, Aikurō sports sparkles all around him. Most notably, his nipples and crotch occasionally give off a pink glow.

Aikurō can easily be described as flamboyant and flirtatious, but can be serious and direct when he needs to. When undercover, he takes on the persona of a tired and unenthusiastic teacher. He is a glamorous smooth-talker with a habit of slowly stripping his clothes and making moves on Ryūko whenever they are in private, much to Ryūko's chagrin. Though he did reveal the existence of Nudist Beach and him being its agent to Ryūko, she did not believe him due to the organization's ridiculous name, earning a surprised and annoyed expression from the man, showing he takes great pride in the resistance group. Despite all of this, Aikurō cares for his students and often talked with Mako rather casually about the situation.

He once worked as an assistant to Ryūko’s late father, Isshin Matoi, who was one of the few that knew of the potential of Life Fibers. After the death of Isshin, Aikurō received his letter that guided him to the whereabouts of the Kamui Senketsu and the task to give Senketsu to his daughter.

To learn more about the Life Fibers, he infiltrated Honnōji Academy and went undercover as a high school teacher. 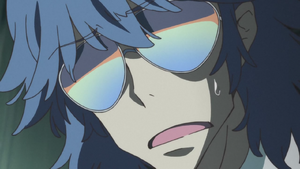 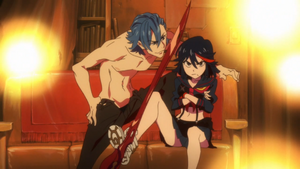 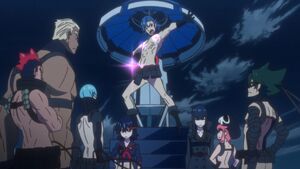