Sub-leader of Amaterasu, Student of Ataraxia

Obsessive Seductress
Synclavia Ainess is one of the main heroines of the Hybrid × Heart Magias Academy Ataraxia series. She is one of prominent members of Ataraxia's Amaterasu and famed for mastering Heart Hybrid Gearmuch quicker than her comrades, specifically Kizuna. It is revealed that she is also known as Ainess Synclavia the lost princess of Vatlantis Empire before her amnesia. After regaining her memories, she return to the throne and became the emperor of Vatlantis. After defeating the Deus Ex Machina and restoring both worlds, her little sister Grace "banished" her from Vatlantis after raising a "coup d'etat" for the throne, so she could live with Kizuna on Lemuria as one of his fiancees and his future first wife.

She is voiced by Ayaka Kimura and Akari Kageyama.

Aine is a beautiful young woman with long eyelashes, white skin, red eyes, glossy pink lips and large breasts. She has long silver hair. She is usually seen wearing her uniform. When Aine does Climax Hybrid, her Heart Hybrid Gear changes in appearance and fuses with Eros (Hida Kizuna), she also acquires a blade and a gun called the pulverizer and her Heart Hybrid Gear becomes more sharp and slender.

After unlocking her memories and Code Breaker, Aine's appearance changes somewhat when filled with magical power, with her hair becoming fully pink and her eyes taking on a more pinkish hue. Her armor Zeros also gains a large magical circle on the upper back which stretches behind her and above her head while Code Breaker is active.

Aine is first seen as a very serious person in her first meeting with Kizuna and told him to go away and made fun of him. However later on she opens up to him and starts blushing when he does perverted things to her. Aine is also shy and stubborn. She doesn't remember what happened the first 7 years of her life because of her memory loss. She has a wicked tongue and likes to look down on other people as noted by Kizuna. Also, unlike her sister, Aine is very quickly embarrassed.

Aine thinks that she is inferior to everyone with the Heart Hybrid Gear so she tries to do anything to become more powerful no matter what. Due to Kizuna increased her Heart Hybrid, she fell in love with Kizuna by becoming an obsessive pervert and she has no problem seducing him and letting him to touch and rubs her body to increase her Heart Hybrid further more.

After the end of volume 4, where she finally remembers her past as the Emperor of Vatlantis (biggest country in AU) she becomes somewhat depressed and melancholy, as events have forced her and her friends to come into conflict. Even worse, in order to save her own world, she had to do horrible things to other people because she couldn't find a better answer. Such as having to kill the man she loved to protect him from being brutally killed by her sister and the Vatlantis army.

After bring the war to an end with Kizuna, Aine mood started becoming more better. She would be more friendly and open about her feeling, especially her love for Kizuna. However, she doesn't mind that her friends love him too, but does see them as her love rivals. She even told them it find for them to marry him too if they want and is okay with them doing Ecstasy Hybrid with him too. Although, she always declares that she'll still be Kizuna first and main wife regardless but agreed of which one of them has pregnancy first get to become first wife. While she still likes to act smug about herself, she doesn't exaggerate as much as she did before. 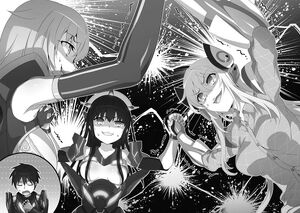