Airazor was a Maximal and soldier during the Beast Wars on the show with the same name. When the Maximals had to deploy stasis pods into orbit before crash-landing on Earth, Airazor's pod was the third to land but the second maximal to join the war. She took the beast form of a Peregrine Falcon and became the Maximal's flying scout. She was also the only one who could fly in Beast mode in Season 1. Though she did not become a transmetal on the show, there is a transmetal Airazor in the Beast Wars toyline.

She is voiced by Pauline Newstone.

In her episode debut, her stasis pod crash landed into Predacon territory but Rhinox and Cheetor found it first. The crash had Airazor's protoform hanging on a thread as there were no living lifeforms for her to take control during Energon surges. Megatron has dispatched Terrorsaur, Waspinator and Balckarachnia to retrieve the pod but Cheetor held them off but got injured in the process. Terrorsaur managed to survive Cheetor's attacks and almost destroyed Rhinox but Rhinox found a Peregrine Falcon hovering above and Airazor was born. Like Tigatron, she would be another scout canvassing the Earth in the air but would be there in battle. As she worked mostly with Tigatron, she had sort of a crush on him and grew attached to him.

In season 2, after Optimus Primal sacrificed himself and caused the timewarp explosion, Airazor were one of the few that did not turn into a Transmetal. Believing that there were more stasis pods around the globe, Tigatron and Airazor decided to travel the world together and find more pods and report other changes caused by the explosion. In the episode "Other Visits", the two Maximals discovered a strange plant which was secretly an alien teleportation device. Its vines captured the two and brought them to an unknown alien region and disappeared and presumed dead until towards the end of season 3.

In the episode "Other Victories", the aliens fused Tigatron and Airazor to form a transmetal fuzor called Tigerhawk and took over his body. He had Tigatron's voice and body and Airazor's wings. After the aliens sacrificed themselves to kill Tarantulas, Tigatron and Airazor's sparks fused as one and permanently became Tigerhawk and rejoined the Maximals. Their return, however, was very brief as two episodes later, Megatron resurrected an ancient warship called the Nemesis and while Tigerhawk tried to destroy the ship, he sacrificed himself and was destroyed.

After the Beast Wars ended, Tarantulas, presumed destroyed, returned in a new, undead form that was fueled by his new Vok powers. The remaining Vok assembled warriors to end this threat, creating Primal Prime and giving new Transmetal bodies to the extant sparks of Airazor and Tigatron, who had split after Tigerhawk was destroyed. 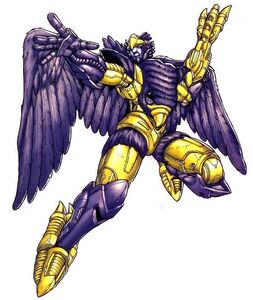 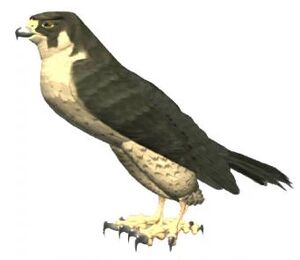