Heroes Wiki
Register
Don't have an account?
Sign In
Advertisement
in: Articles under construction, Outdated Articles, Genderless,
and 64 more

Exploring customs and culture of the Earth.

Get back to Akiridion-5 and save its people from General Morando's tyranny (succeeded).

She was the Queen-in-Waiting of Akiridion-5 disguised as a human girl who didn't want to face the responsibilities of that position and wanted to live a normal life, though she eventually found that her parents, the King and Queen, weren't rulers as good as she thought, and eventually became the Queen of Akiridion-5 following their deaths. She is also Prince Krel's elder sister.

She is voiced by Tatiana Maslany.

In her human form, Aja has white hair and wears a long red button-up shirt and jeans.

Unlike her stoic twin brother, Aja is more adventurous and free-spirited. While she does not have the ambition to become the queen of her planet, which she wants to become a fierce warrior. Regardless of her recklessness, Aja is brave and will do anything for the people she loves.

Although she is never seen, Aja is mentioned by Steve when he sends her a text before fighting in battle. Because he sent her the text from the past in the 12th century, it is unknown whether or not she received it.

Aja appears in the film Trollhunters: Rise of the Titans. 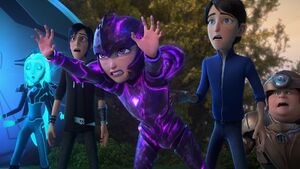