Gautama Buddha
Mother
The Spiritual Leader of the Eternals

Protect Earth from the Deviants.
Bring upon the Emergence (formerly, abandoned).

Ajak is the posthumous overarching protagonist of the 2021 Marvel Cinematic Universe film Eternals.

She is the former Prime Eternal and leader of the genetically-engineered Eternals who protected humanity from the Deviants, but later learned of their true purposes to start the Emergence. Despite initially helping Celestials emerge over the years, Ajak believed in protecting humanity and abandoned her purpose, but would be killed by Kro with the assistance of Ikaris.

She is portrayed by Salma Hayek, who also played Santánico Pandemonium in From Dusk till Dawn, Francesca Giggles in Spy Kids 3-D: Game Over, and Roxanne Chase-Feder in Grown Ups and Grown Ups 2, and voiced Kitty Softpaws in Puss in Boots.

Ajak, along with the Eternals, was created by Arishem the Judge to get rid of the Deviants. She served as the leader of the Eternals to protect planets from the Deviants. She would eventually be sent to live on Earth, where she would protect humanity from the Deviants, and gained the name Gautama Buddha by humanity. While living in Babylon alongside humanity, she convinces Ikaris to tell Sersi about his feelings for her, which he did, and they would go on to be romantically involved for hundreds of years before eventually splitting up when the Eternals went their separate ways.

Sometime after the events of the Blip, she tries to convince Ikaris that humanity is a species worth preserving despite their faults and that this time, allowing a new Celestial to be born isn't worth the price of allowing all life on the planet to die. He seems to listen to her, but then takes her to Alaska, where he reveals that there were some Deviants that were still alive. When Ajak decided to turn against the Celestials, Ikaris then murdered her by giving her to the Deviants, with one known as Kro taking part of her energy power. Her corpse was later buried in South Dakota by Ikaris, who would keep the incident a secret until the events of the film.

Arishem the Judge would give Sersi the communication sphere since he believed she was Ajak's successor, and the Eternals would unite once again to honor Ajak's death. However, when the group learned of their true purpose, Phastos questioned Ajak for keeping secrets from them. The Eternals would split into factions of those who wanted to start the Emergence, and Sprite would create an illusion of Ajak to trick Sersi. The fight between the Eternals would be stopped as Ikaris would fly into the sun out of guilt of causing Ajak's death, thus ending their conflict. Ajak's death, meanwhile, was also avenged along with Gilgamesh's when Thena killed Kro, Ajak's true murderer. 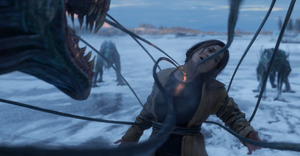